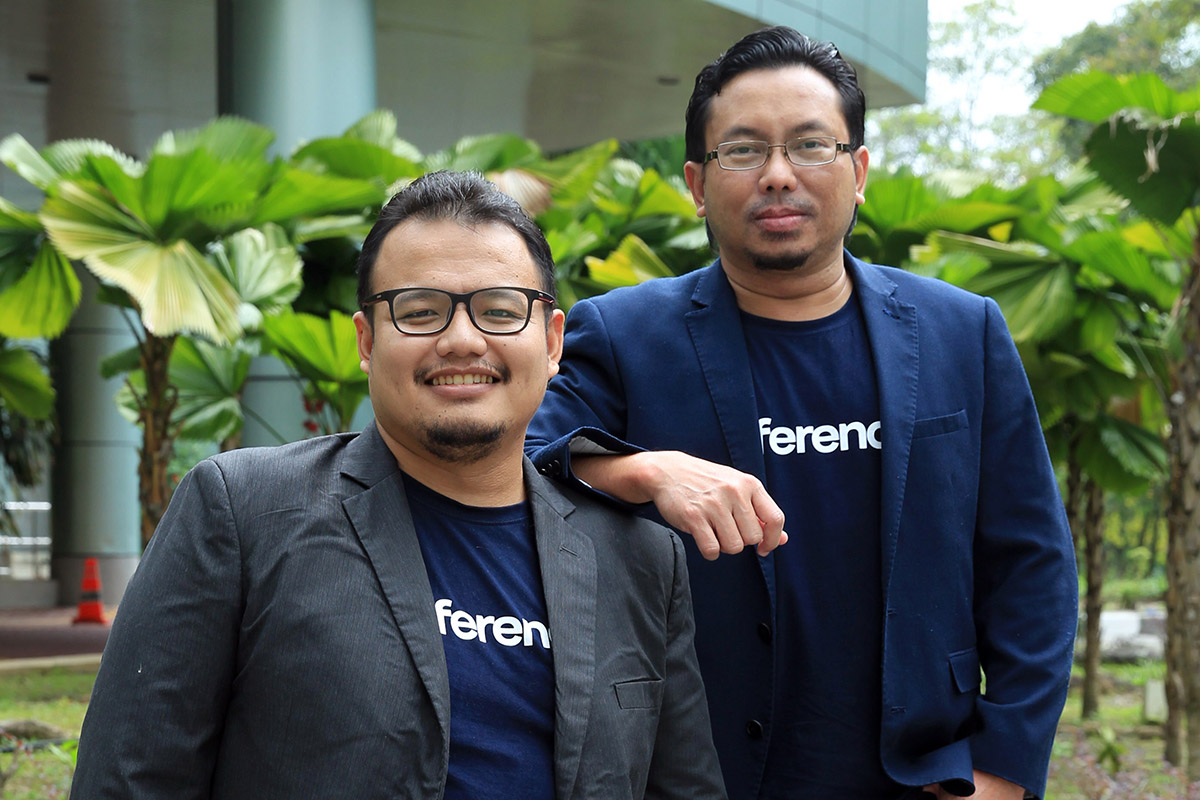 This is because at Aerodyne, he was focused on AI-driven drone applications, but a group of colleagues saw the potential of AI as a whole and not just in the drone space.

He was especially interested in computer vision, a subset of AI that deals mainly with videos and images, such as visual analytics to carry out things such as facial recognition.

“Facial recognition was one of the things we wanted to do at Aerodyne but it was outside [the scope] of what they did. We really saw an opportunity and decided to branch out to be the first home-grown AI solution provider.

“With drones, there were only a limited number of ways we could apply AI. But AI is a very big field,” Izad tells Enterprise.

Inference Tech’s products employ technology in the areas of health, safety and environment (HSE), such as the safety and well-being of workers at construction as well as oil and gas sites. Its proprietary technology, Eyesite, is a video monitoring technology that has been designed to identify and alert the person in charge when a worker at a specific site is breaking safety rules. For example, at a construction site, Eyesite can detect if a worker is not wearing a helmet or gloves. “We leverage closed-circuit television (CCTV) cameras and drones and any other kind of visual device, even mobile phones. We can automate the monitoring process,” Izad explains.

“We’re hardware-agnostic in the sense that, if clients want to do it on drones, mobile phones, dashcams or any other recording hardware, it can work. As long as those devices have cameras on them, we can somehow make it work.”

This also means that companies do not need to purchase new hardware to use Eyesite and other Inference products. Izad says even though a company’s CCTV infrastructure is old (as is the case with most clients), Inference Tech can make the software work, with a bit of tweaking.

“Our AI technology, including Eyesite, works like human beings. If we cannot differentiate one object from the next, the AI will not be able to differentiate them either. But if the human eye can detect things, the AI can detect them as well. In that sense, we’re not replacing humans with our technology.”

Izad explains that companies spend millions or even billions annually, just on safety. Despite having accident prevention measures in place, incidents still happen on site. Izad and his team realised something was flawed with the system and decided to get to the bottom of it.

“The HSE measures available here are from the previous century because a lot of things are still done manually,” he explains.

“Typically, a safety officer is hired to be at a job site, monitoring the people and their surroundings on a daily basis. These officers have to eyeball everything and take note of potential incidents, which is not very effective.”

Izad adds that companies such as Petronas take safety very seriously. “For Petronas, it’s for obvious reasons, as it deals with oil and gas, which is very dangerous. In the construction industry, they also take safety very seriously because whenever incidents happen, regardless of whether they are fatal, it greatly affects the company in everything from work progress to public relations.”

Most of those that make up the core team at Inference Tech are former Aerodyne employees. The company bootstrapped its RM100,000 start-up capital with money from friends and family.

At the time the Movement Control Order (MCO) was being lifted and companies were putting in place standard operating procedures (SOPs) to restart operations, Inference Tech decided to extend the capabilities of its technology to include a Covid-19 module. Izad says that, within two weeks, the team developed the module, which is able to detect the usage of face masks, whether people are socially distancing themselves and even temperature checks.

With these features, Izad says the technology can help construction sites monitor and control the situation in the event a Covid-19 outbreak happens onsite. “For example, if we’re talking about a large development where there are 20 blocks being built and a Covid-19 outbreak happens at only two blocks, the construction company will only need to stop work at the two blocks, provided that they have proof. And this can act as proof,” he explains.

The mission, says Izad, is to decrease the number of potential HSE incidents. Even if something happens and it is not fatal, it will put a stop to onsite operations, leading to a decrease in efficiency, and consequently, revenue.

“When we started Eyesite, investors did not see the value because the question was, ‘Where is the ROI (return on investment) for clients?’ By the time the ROI is realised, however, it may be too late, as something bad might have happened or someone may have lost their life.

“Most companies have automated systems but not the capability for safety monitoring. So, this is where we see potential. Our niche product can make a change in this ecosystem.”

Izad says the team took about a year to develop Eyesite and two weeks during the MCO to develop the Covid-19 module. The system was developed in partnership with Petronas. “It took a chance on us and we gained access to its site and plant. We took a lot of Petronas’ data to perfect the AI; so, we ended up co-developing Eyesite with it.

“Petronas is the intellectual property holder on paper and we are the co-developer of the technology, where we are the sole licensee.”

Izad shares that while Inference Tech’s products are being offered by bigger companies in other parts of the world, with the biggest players being in China, he believes the company has an advantage in the local market.

In fact, when the company started 1½ years ago, the big boys from China were gearing up to enter the Malaysian market.

“These companies set up camp here and even poached AI talent from local players. But, of course, setting up in a new territory or country takes time. So, we managed to set up Inference Tech before they got into the market and secure some important projects before they could,” Izad explains.

At the moment, Izad says, the systems used by local councils are disjointed and non-centralised. The Selangor infrastructure solution, InfraSEL, will enable local council workers to detect potholes and other road defects through a dashcam as well as carry out traffic monitoring.

“We’re leveraging AI, data science and the internet of things (IoT) to help local councils do their work faster and more cheaply. We came into the picture to digitalise the processes; so, what that means is, first, we digitise the process of collecting or gathering reports from road users. Currently, they have a hotline, but after you submit a report through the hotline, there is no follow-up and no action taken,” says Izad.

“Using Cityscape, we collect complaints using our app and hotline. We also [scour] social media to proactively gather complaints using keywords, location tags and images. For example, someone uploads a photo of a pothole on Twitter and tags the location; we’re able to pick that up too.”

Next is making things easier for the local council workers to identify potholes using a dashcam. Izad says currently, on a daily basis, a council worker drives around an area looking for potholes or road defects. When he finds one, he will have to pull over, place a cone on the damaged area and take a picture of it. After that, the worker will have to fill in a report form to be sent to the maintenance team, which will then go out to these places with the necessary materials to repair the road.

This process disrupts traffic and causes road delays, says Izad, adding that, in some instances, the manual checking does not capture all the defects adequately. “For example, along a 1km stretch, there are 10 potholes, but the workers identified only five. The maintenance team will bring enough raw material to fix five potholes and will not have enough to deal with the others.

“We use drones and dashcams with our software to identify road defects. The system is automated and will detect and geotag potholes, with a very slim possibility of missing defects. This also causes less road congestion,” Izad adds.

The reporting process is also being automated, as it requires visual evidence of road defects to be attached. Izad says, according to the council’s SOP, a report needs to be submitted when the defect is found, when it is being fixed and after it has been repaired.

“This process takes a lot of time, so our system simply captures photos of the defects and transfers them to the system where the report is generated automatically.”

Although the company was initially focused on building software, Izad says it went into hardware recently “out of necessity”, and specifically into the Artificial Intelligence of Things (AIoT) space.

“We built a camera that is a lot more battery- and power-efficient, and this is pre-installed with our software,” Izad explains, adding that it has already developed a prototype with Petronas.

The company also recently expanded into Singapore by signing a memorandum of understanding with a government-linked company to be the technical partner for its AI infrastructure.

The pilot project was put on hold, however, owing to the spread of Covid-19 and the Singapore general election. Izad says the company is waiting for the border to reopen so that work can resume.

Inference Tech recently entered the healthcare space, focusing on building an e-commerce marketplace where people can purchase prescription medication online and have it delivered to their doorsteps. Ultimately, Izad says, the company is poised to be a market leader in the HSE space.

“We’re focusing on this space because it is unique and nothing much has been done in it yet. We want to corner the market so that players will think of us when they think about HSE. As for the other states, we want to be the people they think of when they want to build infrastructure for their local councils.”