After being hit in April, vehicle sales rise in May We are not surprised by the May 2015 numbers. Sales in April had been hit by the implementation of the goods and services tax (GST). We expected a rebound in May, but thought it would be lower than the March  volume, which had been boosted by aggressive sales promotions pre-GST. Year-to-date the TIV makes up 39.5% of our full-year forecast of 670,000 units, which is not totally unexpected, as we expected a weaker second quarter CY15 (2QCY15) due to the impact of the GST and a gradual improvement in the upcoming months as consumers take advantage of aggressive promotions for the Hari Raya celebration and getting used to the GST. As such, we maintain our 0.5% y-o-y growth TIV forecast of 670,000 units for 2015.

Berjaya Auto Bhd, distributor of Mazda vehicles and spare parts based in Malaysia, remains our top pick for the sector. Its m-o-m sales rebound of 63.8% to 1,155 units in May 2015 outpaced the industry. We expect the introduction of its new crossover (Mazda) CX-3 model, expected in 3QCY15, to further drive up Mazda’s sales volume for the rest of the year.— CIMB Research, June 23 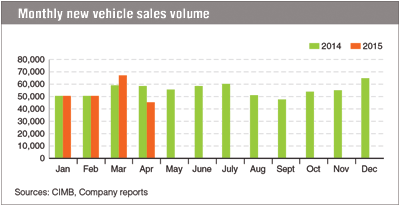