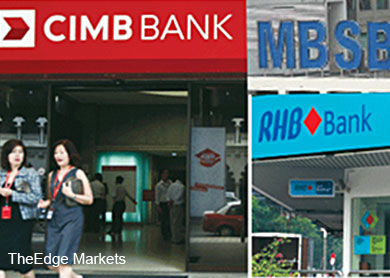 DUBAI/KUALA LUMPUR (Oct 24): Aabar Investments is demanding a hefty premium for its minority stake in Malaysia's No.4 bank, sources say, as the Abu Dhabi state fund leverages on its amplified role in a $22 billion merger that will create Southeast Asia's fourth-largest lender.

When the Malaysian stock exchange last week barred the Employees Provident Fund (EPF) from voting on a plan to merge CIMB Group Holdings, RHB Capital Bhd and Malaysia Building Society Bhd (MBSB) due to the state pension fund's majority ownership in the three lenders, the spotlight was suddenly thrown onto secondary shareholders.

Aabar, which owns 21 percent of RHB, wants its stake in the bank to be valued at 11-12 ringgit per share, sources familiar with the deal said. That would be as much as 11 percent more than what Aabar paid three years ago for its RHB holding and above the value placed on RHB of 10.03 ringgit per share in the proposed merger.

"Aabar is not happy to take another cut on its investment. They were not happy with the merger talks... Looking at the market price for RHB, they know the likelihood of making money on this is negligible," said a Gulf source close to the fund.

But it is not in Aabar's interests to derail the deal as a failed merger could drive down shares in the stock market, hurting Aabar's investment in RHB, analysts say.

Under the deal, RHB will issue shares to the much larger CIMB, but CIMB shareholders will own 70 percent of the merged entity. The Islamic banking arms of CIMB and RHB would then acquire MBSB to form what would be one of the world's biggest Islamic banks.

Agreement to Aabar's elevated valuation could increase the cost of the share swap for CIMB shareholders by at least 20 percent, according to Reuters calculations.

Aabar did not respond to several requests for comments.

RHB declined to comment, while CIMB and MBSB did not immediately respond to Reuters queries.

"We believe it is more likely that CIMB walks away from the proposed M&A than to be constrained by the remaining shareholders of RHBC/MBSB seeking better terms for a 'favourable vote'," Chris Oh, a Kuala Lumpur-based UBS analyst, wrote in a note.

But a failed merger will be a big setback for CIMB Chairman Nazir Razak, the brother of Malaysian Prime Minister Najib Razak, some analysts say, diminishing the bank's stature in the long run.

Losing the deal could create an opportunity for Malayan Banking Bhd (Maybank), the country's biggest banking group, to take another stab at RHB after scrapping takeover talks in 2011.

"The ultimate completion of this deal hinges on the bank's (CIMB's) determination on seeing this deal through," said Kevin Kwek, a Singapore-based analyst at Sanford C. Bernstein. "Letting this go can mean Maybank steps into the picture, and the limited options available to get larger."

Aabar bought the RHB stake from Abu Dhabi Commercial Bank in June 2011 at a rich price of 10.8 ringgit per share, which valued RHB at around $7.2 billion, or 2.25 times its book value.

Aabar, a top shareholder at a number of international firms, is now keen to make money on the deal after the value of its global assets slumped.

Aabar then wrote off $392 million of its $1 billion investment in the commodities trader Glencore, less than two years after taking part in its listing.

Sources say, if all fails, Malaysia may turn to its close relationship with the Abu Dhabi leadership to broker a mutually acceptable deal.

OSK Holdings Bhd, the next largest shareholder in RHB after Aabar with a 9.9 percent stake, could also be key to the success of Aabar's demand.

Both investors would see their combined voting power in the lender increase to 53 percent from 31 percent now that the EPF is barred from voting.

OSK could follow in Aabar's footsteps as it would also benefit from Aabar's demand for a higher premium, said an investment banker who used to work with OSK, a small financial group built by Malaysian veteran broker Ong Leong Huat.

But many bankers and analysts see it differently, saying OSK is unlikely to do "anything funny" and jeopardise the proposed merger.

OSK officials did not immediately respond to requests for comment.