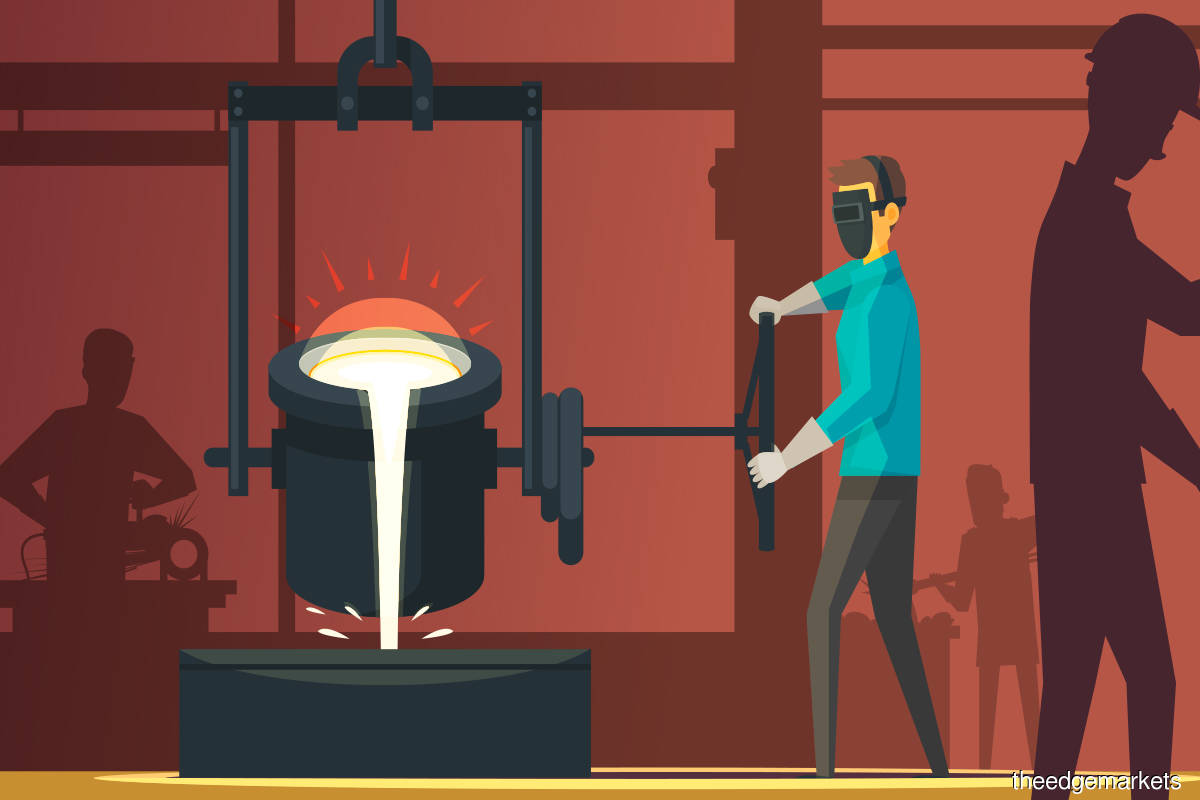 Arguably, the future has never been brighter for metal companies. As steel and aluminium prices have climbed dramatically to molten peaks, companies have expanded their operations in a bid to generate even bigger profits. Three years after ESSB fired up its dormant fully integrated blast furnace steel plant in Kemaman, Terengganu, the steel slabs and billets producer is now ready for its next big step — a RM3 billion expansion that includes venturing into the hot rolled coil (HRC) business.

In an exclusive interview with The Edge in November, Hiap Teck executive director Law Wai Cheong disclosed that ESSB — a joint venture (JV) between Hiap Teck, its Chinese partner Shanxi Jianlong Industry Co Ltd and Chinaco Investment Pte Ltd — had an ambitious expansion plan to almost quadruple its steelmaking capacity, from 700,000 tonnes a year currently to 2.7 million tonnes by 2023. “We have allocated capital expenditure of RM3 billion for two main purposes — to add a blast furnace to make molten steel and build a new HRC plant,” he said.

It is estimated that the new HRC capacity of two million tonnes will provide ESSB with an additional RM7 billion in revenue.

WGR was spun off from GWR before it was listed in July this year. Its gold mining business, dubbed the Gold Duke Project — formerly known as Wiluna West Gold Project — is now an advanced exploration project. — By Liew Jia Teng The share price of Press Metal was up as metal prices recovered, adding US$3.4 billion to the wealth of Koon and his brothers, and propelling them to No 3 with a net worth of US$6.4 billion.

In early September, the company’s share price rose to a record high of RM5.81 as aluminium prices climbed to their highest in more than a decade on the back of concerns about raw material supply amid a coup in Guinea — a major supplier of bauxite. Bauxite is the feedstock used to make alumina, which is further processed into aluminium, and Guinea accounts for more than half of all imports from China.

The political instability in Guinea had already rattled global aluminium markets as prices in London notched a fresh 10-year high and futures contracts in China climbed to their highest since 2006.

Press Metal’s share price jumped to a fresh peak of RM6.20 on Oct 14. External factors aside, the strong optimism was also partly due to the progressive ramping-up of the group’s Phase 3 Samalaju expansion project.

Another catalyst is the targeted full commissioning of Press Metal’s 25%-owned PT Bintan alumina refinery (Phase 2) in the first half of 2022, which will provide an additional boost to the group’s earnings.

With the anticipated increase of production volume, Press Metal aims to expand into new markets for its value-added products next year. — By Liew Jia Teng Tan Sri William Cheng Heng Jem has been trying to revive his hot rolled coil (HRC) operations for some time now. Key to his plans is a strong partner and, of course, capital that will be largely used to build a blast furnace.

For the uninitiated, HRC is used to create cold rolled coil which, in turn, is used in the manufacturing of such items as electrical goods and automobiles.

Until it ceased operations in 2016, Cheng’s Megasteel Sdn Bhd was the only HRC maker in the country, but owing to cash constraints, Megasteel’s assets were hived off to sister company Lion Industries Corp Bhd for RM537.73 million in 2018.

Cheng has a 34.59% stake in Lion Industries but is not on the board of the company, leaving the operations to family members.

When it was still running, Megasteel’s issues hinged on the use of scrap iron as its raw material, with its chief asset being an electric arc furnace, despite a blast furnace being deemed more efficient.

There were also issues with transport as Megasteel’s operations were in Banting, Selangor, unlike many other HRC makers that initiate operations close to a port to reduce transport costs.

In its last recorded financial performance for the financial year ended June 2018, the company posted an after-tax loss of RM1.88 billion sans any revenue as operations had ceased. Its accumulated losses were at an astronomical RM5.31 billion. For the period in review, its total liabilities amounted to RM5.19 billion while total assets were RM558.78 million.

Despite the past difficulties, Cheng has been adamant about restarting the HRC operations.

Will the 78-year-old finally secure a partner and kick-start the HRC operations, and will he fare better this time around? — By Jose Barrock