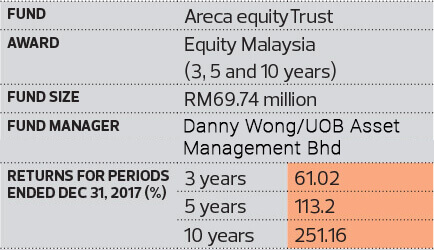 CEO and fund manager Danny Wong says its key elements are consistency, which translates into superior long-term outperformance, its focus on managing capital preservation and the speed of execution and decision-making. “For example, the fund normally invests between 70% and 98% of its net asset value (NAV) in local equities and equity-related securities. However, in attempting to respond to adverse market conditions, we are able to tilt the fund’s exposure to equities to way below its normal allocation (at times as low as 50% exposure). We have adopted this temporary defensive strategy rather successfully, especially during uncertain times,” he adds.

Having deployed much of its cash during the Trump sell-off near the end of 2016, the EquityTrust fund remained almost fully invested (about 90%) last year, focusing on thematic sectors and stocks that ride the macroeconomic outlook, says Wong. “Every month, the investment committee would approve the fund’s strategy and asset allocation while the fund manager focused on picking the right stocks within the sectors,” he adds.

“Sometimes the fund invested in fundamentally sound stocks that were not in a thematic sector, using a bottom-up technique. We think it is important to focus on the fundamentals and not to overreact to market noises.”

Areca’s assets under management (AUM) has increased due to the improving market conditions, says Wong. He adds that while its AUM is important to its bottom line, the fund house’s focus remains on improving its returns to investors.

“At times, we had to compromise on our company profits to uphold our service standards, investment returns and compliance records, as proven in difficult years such as 2015 and 2016,” he elaborates.

Wong says the fund had weathered many crises and market turbulence since its inception. “Thankfully, we have come out on top. This highlights the importance of focusing on the fundamentals and investing for the long term.”

He says the fund house found it challenging to manage investor sentiment in such times. “In times of market turbulence, client-servicing capabilities become key differentiators. The stability of the fund size that is absent of lumpy withdrawals is vital to helping the fund managers do their job,” he adds.

Wong believes that the goldilocks environment, which historically has been good for risky assets such as equities, could continue. Nonetheless, fund houses have to be aware of any sudden spikes in inflation, he adds.

This year, Areca is invested in selected themes, favouring construction and consumer names with strong growth potential as well as exporters with visible growth from capacity expansion. “We will continue to manage the fund with a long-term perspective. But for long-term investors such ourselves, periods of high volatility can present opportunities to buy into good companies at even better value,” says Wong. — By Laili Ismail