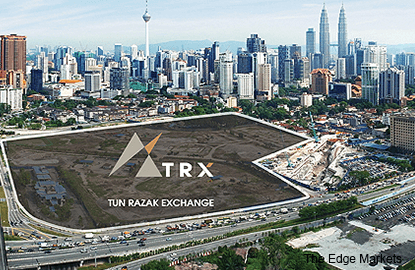 According to a Companies Commission of Malaysia (CCM) filing, the name change was effective yesterday.

It is worth noting that 1MDB’s energy unit was renamed Edra Global Energy Bhd around this time last year, in what appeared to be a deliberate move to distance the unit from its controversial parent ahead of what would have been its multibillion-ringgit listing.

It was originally supposed to be 1MDB Energy Group Bhd. The name change was submitted to CCM on Dec 1, 2014.

However, TRX City has yet to file its latest set of accounts for the financial year ended March 31, 2015 (FY15), based on the latest CCM filing. It should be noted that TRX City could have filed the accounts, but they are not publicly available on CCM’s website.

CCM had earlier granted a six-month extension to its parent 1MDB to file its financials after the fund missed the Sept 30 deadline for the submission of its audited accounts for FY15.

In the meantime, the group was reportedly seeking a one-month extension for the submission of 1MDB RE and Edra’s accounts.

Deloitte Malaysia previously stated that the audit of Edra’s financials would be completed by mid-December before submission to the CCM. There has been no update on the auditing of the financial reports since.

1MDB president and group executive director Arul Kanda Kandasamy could not be reached at the time of writing.

1MDB has been in the spotlight of Malaysian and international media in the past one year, after it racked up RM42 billion in debts as at end-March last year, overpaid for certain assets, incurred high borrowing costs, and its financials showed a mismatch in its cash flow and debt repayments.

On Nov 23, 1MDB sold its power assets under Edra to China General Nuclear Power Corp for RM983 billion to wind down its operations, following the aborted move to publicly list Edra in 2014.

More recently, it was reported that 1MDB may be close to finalising a deal on the sale of a 60% stake in the 197ha Bandar Malaysia township.

It was reported that a consortium led by Malaysia’s Iskandar Waterfront Holdings Sdn Bhd, controlled by property tycoon Tan Sri Lim Kang Hoo and China Railway Construction Corp, was the forerunner for the stake, in a deal valued at RM13 billion.

Other candidates vying for the 60% stake are Tan Sri Desmond Lim partnering a Qatari state-owned company and Permodalan Nasional Bhd.

In a statement earlier yesterday, 1MDB said it has fully cooperated with the lawful authorities investigating the company, including sharing detailed information with the bipartisan Public Accounts Committee.