KUALA LUMPUR: Malaysia’s fiscal deficit targets of 3.5% for 2014 and 3% for 2015 are unlikely to be achieved as they are “overly” and “unrealistically” ambitious to begin with, said Justin Wood, The Economist Corporate Network chief economist in Southeast Asia.

“We think government spending will grow at a faster rate than they are planning for in their budget. Our forecast is that they will miss the targets — they are spending too much and not getting enough in tax revenue,” Wood told The Edge Financial Daily yesterday, adding that The Economist is forecasting Malaysia’s public spending to grow at 6% next year.

He was met after a closed-door launch of “Redrawing the Asean Map? How companies are crafting new strategies in Southeast Asia”.

“Even with [the] removal of subsidies, the targets still cannot be achieved. They are taking measures to increase their tax revenue, but we think their spending is going to grow too quickly to meet their targets,” he said. 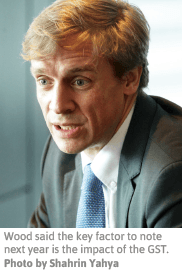 Wood pointed out that although the targets are over-optimistic, it will not be “missed by a mile” as the government is scaling back petrol subsidies, introducing the goods and services tax (GST) and taking the “right measures” to restore the country’s fiscal health.

“Every government that tries to restore fiscal health finds it is much harder than they think and takes much longer than they expect. The UK is experiencing the same in trying to get their government’s finances in order, but [they] just realised they missed their targets. It takes a long time [and] it’s a slightly painful process. It will be the same for Malaysia,” Wood noted.

Wood said the key factor to note next year is the impact of the GST, as the Japanese economy had suffered an impact “far worse” than expected when it raised its consumption tax in April.

“It’s difficult to forecast what the impact will be. There is the potential for it to be highly disruptive. Nevertheless, our view is that it won’t be. There will be some disruption in the flow of trading, but everyone knows it’s coming and knows what it entails,” he said.

On the flipside, Wood said the introduction of GST has the potential to be positive in terms of boosting tourist inflows as tourists can reclaim the GST paid. Malaysia calls it the tourist refund scheme, which is applicable for goods taken out of Malaysia, and not for services or products paid for and used here.

“[Especially] if your currency is weak, you’re likely to attract more tourists coming in. Our forecast is that industries related to tourism — hotel and restaurants, are going to do very well next year,” he said.

On the current weakness of the ringgit, Wood said there will be a structural appreciation in the longer term, and that it could breach the psychological barrier of US$1 = RM3 in 2018.

He said that an interest rate hike in the US that occurs more quickly than expected could be potentially disruptive for the Asian economy next year, as capital would retreat from Asia back to the US.

“Malaysia is exposed to a degree. A lot of money has come into the country and there’s the potential that it will leave and undermine the ringgit [further].

“[However], we don’t think it will, as [institutional investors] are still buying into the Malaysian story and is here to stay in spite of the risk,” Wood added.

This article first appeared in The Edge Financial Daily, on December 5, 2014.