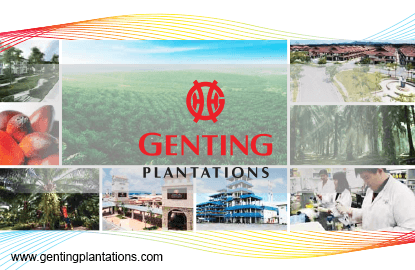 This will bring GENP Group’s combined plantation landbank in Malaysia and Indonesia to 260,371 ha, from its present 238,376 ha.

GENP intends to finance the proposed acquisitions via internal funds and external financing.

The first deal sees GENP acquiring CAA for US$34.55 million, which holds the rights to develop 8,095ha of land in Kabupaten Sanggau in West Kalimantan Barat into an oil palm plantation.

Concurrently, GENP is buying PCI for US$7.6 million, which holds the rights to develop 13,900-ha of land in Kabupaten Sintang, also in West Kalimantan, into an oil palm plantation.

"The proposed acquisitions are in line with our long-term strategy to increase interest in the palm oil business, consistent with its confidence in the continued growth prospects of the industry," said GENP.

It added that the move represents a positive step by the group towards realising its vision of establishing itself as a major player in the industry.

GENP also said the lands are located within close proximity to GENP’s other landbank in West Kalimantan, and presents potential synergies and economies of scale.

"It will also expedite GENP Group’s upstream expansion in Indonesia, as some 3,127-ha have already been planted, thus raising GENP Group’s total planted area in Indonesia by 4.6% to 70,829-ha, from 67,702ha.

"The proposed acquisitions represent a strategic investment by GENP, which is expected to contribute positively to the earnings, as well as shareholders’ value of the company in the future," it added.

The transactions are deemed related party, as the target companies are subsidiaries of Sepanjang Group, while GENP and Sepanjang Group own 73.69% and 26.32% respectively in PalmIndo.

"Accordingly, Sepanjang Group has abstained and will continue to abstain from deliberating and voting at the relevant board meetings of PalmIndo, in relation to the proposed acquisitions," it added.