HSBC: Reversal in SE Asian currencies against the US dollar has ended 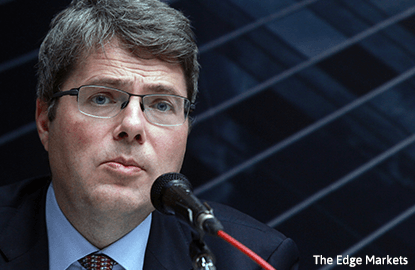 KUALA LUMPUR (April 5): HSBC’s managing director and head of emerging markets forex research Paul Mackel said the reversal of Southeast Asian (SE Asian) currencies against the US dollar has come to an end and sees the ringgit weakening to 4.25 against the greenback by end of this year.

“Our view is [that] SE Asian currencies have seen quite considerable adjustment versus the dollar (when compared with last year); we believe a lot’s done now,” Mackel said in a media conference call today.

However, he opined that the reversal — partly due to commodity prices bottoming out — is a healthy development, compared with what the market experienced last year.

Having said that, he emphasised that some foreign funds have turned positive on high yielding currencies such as the ringgit and Indonesian rupiah, as these currencies had weakened significantly against the US dollar last year.

As these currencies may remain attractive for some foreign funds, he expects them to stay relatively strong throughout this year.

According to BofA Merrill Lynch Global Research’s report dated March 31 and Bloomberg data, most SE Asian currencies rebounded against the US dollar in the first quarter of this year, with the ringgit leading its peers with a gain of 7.3%.

BofA Merrill Lynch Global Research said in the report that the rebound in Southeast Asian currencies in the first quarter was due to easing fears of renminbi (RMB) devaluation, rising commodity prices and a dovish stance by the United States Federal Reserve.

Meanwhile, Mackel expects the RMB to continue to depreciate against the US dollar, to end at 6.9 by end of this year.

“I don’t think it is a significant devaluation (when compared with the current level of around 6.48 at the time of writing); it is a natural weakening of the currency,” Mackel added.

According to Mackel, the ringgit and Singaporean dollar are more sensitive to the RMB, among SE Asian currencies, but over time, the sensitivity has dissipated.

Overall, he sees SE Asian currencies as being quite resilient to China’s economic growth, while emerging currencies are less sensitive to RMB’s movement, as compared to August last year.

“That is a healthy development, because it implies that the market is looking at currencies on an individual basis.

“Looking into future, this trend will be more notable; other Asian currencies will be traded more independently to some of the RMB volatility,” he said.