A robotic tool that ensures safe and elegant surgery 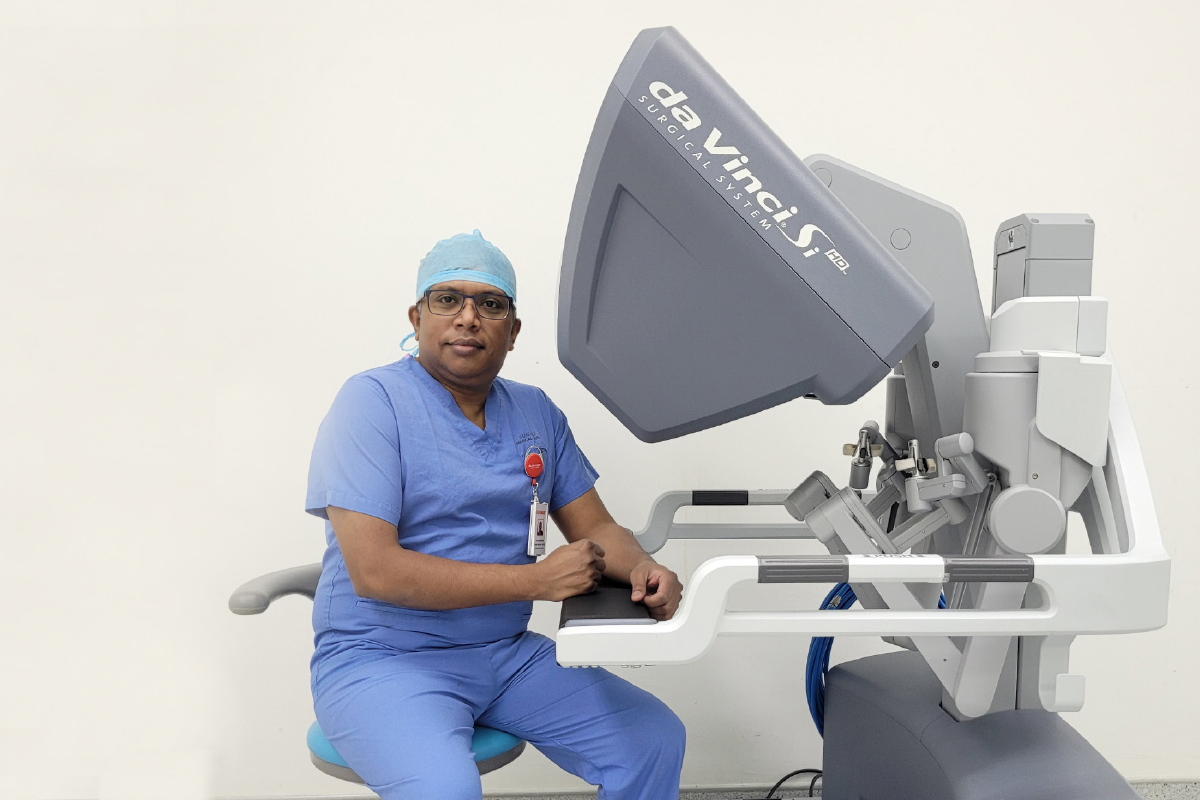 What comes to mind when surgery is mentioned is surely the cut, followed by the pain and scarring. The very thought of undergoing surgery is bound to daunt anyone. But with the advances in medical technology, Dr Thangesweran Ayakannu from Sunway Medical Centre in Sunway City, says that faster recovery with minimal scarring is possible, with robotic-assisted minimally invasive surgeries.

“Women want to look their best, so you don’t want to give them a big transfer scar. Robotic surgery is safe and cosmetically elegant,” says the gynaecologist, gynaecology oncology and robotic surgeon.

Having said that, Dr Thangesweran emphasises that there is a place for open surgery, laparoscopy or robotic surgery, depending on the patient’s medical condition, the pathology of the disease and when it presents.

“Each method has its place and it is important to evaluate and understand the right time to offer surgery. The doctor decides, along with the patient, who has to be involved in every step of the decision-making. That’s why patient education is important for informed consent.”

Dr Thangesweran did his training in the UK and France, where candidates have to fulfil strict criteria to qualify as a robotic surgeon. With the right patient and the right clinical problem, robotic surgery is the best surgical tool to use because of its many benefits for both benign and cancerous gynaecological conditions, he says.

The da Vinci Surgical System is useful for removing uterine fibroids because blood loss is minimal (100ml) compared with traditional surgery, during which patients can lose 1,000ml to 1500ml (rough estimation) of blood. It can also be used to remove the cervix, uterus and ovary for benign conditions, and in the early stage of cervical cancer, or the pre-cancerous stages of the womb and uterine cancer including sentinel lymph node study and bilateral pelvic lymph node dissections (only for womb cancer).

“The robotic system is an amazing tool for hysterectomy: there is just a teaspoonful of blood loss and I send patients home with paracetamol. If the op is in the morning, you can leave in the evening or early the next day.”

When Ann (not her real name) found that she had to undergo a hysterectomy to remove her womb, thoughts of being out for six weeks, a huge scar across her belly and, of course, the pain, stayed in her mind. In her mid-50s, she knew women who took months to recover after open surgery.

“I can’t believe I’ve had major surgery. I took a few painkillers at night the first few days after the op — that was all. I avoided heavy lifting, as advised, and was able to move around with ease. Dr Thangesweran said I would get back to my daily life sooner than I thought and he did not disappoint,” says Ann, who hopes her story will help someone contemplating a similar procedure. There are three components under the da Vinci Surgical System: a surgeon console with which the surgeon controls the instruments while viewing the patient’s anatomy in high-definition 3D; a patient cart that holds the camera and instruments being controlled; and a vision cart which enables communication between the components.

The da Vinci Surgical System translates the surgeon’s hand movements at the console in real time, bending and rotating instruments during the surgical procedure. The tiny wristed instruments move like a human hand, but with a superior range of motions.

“If I don’t move, it won’t too. Without me, the robot does not produce the movements. What’s important is the tactile feedback: the more you do and train, the more you learn the feedback. It comes with training and experience,” explains Dr Thangesweran.

When Dr Thangesweran became a house officer in 2000 in the UK, the first patient he saw was a 26-year-old lady dying of cervical cancer. The cancer can erode blood vessels, which leads to bleeding. When that happens, the doctors will let the patient die comfortably.

“In the UK, all the bedsheets are white. When I saw the girl — the picture is still in my mind and will never go away, of the sheet turning red — I thought I had to do something to help other girls not go through the same thing.”

That resolve led him to gynaecology, and then oncology. Dr Thangesweran, who promised his father he would come home to serve Malaysian women after completing his studies, sees the da Vinci system as one tool to help him look after them better.

“As for the women out there, I can only beg those who are sexually active to do their pap smears. It is the only screening test for gynaecological cancers. It is a life-saving test.”