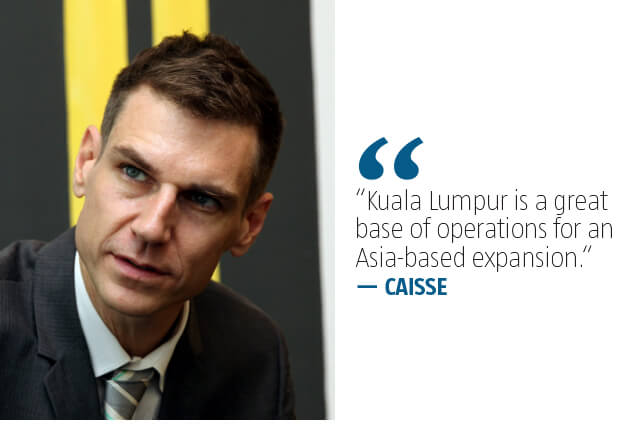 For Pickles Auctions, Malaysia was a whole new adventure. Its new Kuala Lumpur base was the first overseas foray for the Australian vehicle valuation and auctioneering specialist.

And the experience is mutual — there is no local equivalent of what Pickles Auctions does in Malaysia. In other words, it was entering a blue ocean market via its local subsidiary Pickles Ventures.

“It’s like walking into a country and finding that no one does pizza delivery there when we do deliveries within 30 minutes or less everywhere else in the world,” quips Pickles Asia general manager Joey Caisse.

In a nutshell, Pickles — Australia’s largest privately owned auction company — helps insurers recover as much value as possible from wrecked and scrapped vehicles after the insurance payout to the original vehicle owners. Pickles’ underpinning philosophy is to maximise the return on every asset put on sale on behalf of its vendors.

The average ROPV in Malaysia prior to Pickles was a dismal sub 5% compared with an 18% average in Australia. Post-Pickles, the Malaysian ROPV average is now in the region of 22%, Caisse says.

In actual ringgit and sen, Pickles’ services have resulted in RM18 million in additional cash gain for the industry overall, according to the company.

The additional value recovered is positive not just for the industry players, but ultimately the policyholders as well. In the longterm, higher value recovery from wrecked and scrapped vehicles will theoretically allow insurers to reduce premiums.

That said, Pickles does not just work for insurance players. The company can also help private vehicle owners fetch better sale prices for their used vehicles via auction, Caisse says.

Setup in 1954, Pickles now commands a 70% market share in Australia with 250,000 vehicles sold on an annual basis. Its global workforce totals 1,000 staff and its annual turnover exceeds A$2.7 billion. According to Caisse, the establishment of a regional Centre of Excellence (COE) in Kuala Lumpur  means that  the business units supported by Pickles Ventures, the start-up incubator arm of the auction company, will also get a boost from local talent, especially when it comes to technology and marketing.

Pickles is currently staffing up with top software developers to build next-generation services for the Australian car market and beyond. These new services include Carzapp, a wholesale car trading platform, Iungo, a fleet management company and Datium, a company that uses machine learning and decades of Pickles’ auction data to predict what used cars will be worth in years to come, says Caisse

The company’s entrance into Kuala Lumpur is part of a bigger master plan.

On one level, being invited by a long standing client into a new, untapped market presents obvious incentives for Pickles as it can hit the ground running with a ready revenue stream.

Apart from the obvious advantages such as an English-speaking population, having Commonwealth-based laws and being able to offshore back-office functions from Down Under, another factor attracting Pickles to Kuala Lumpur is geography.

“Kuala Lumpur is a great base of operations for an Asian expansion. The city is close to Indonesia and Thailand, for example, so for me to jump on a plane it is not too far to get to a lot of places in Asia,” says Caisse.

The general manager confirms that Pickles is exploring potential expansion into several neighbouring countries from its Kuala Lumpur hub but declined to say more, save that discussions are ongoing.

Todate, Pickles has invested about A$3 million in its Kuala Lumpur hub with roughly 25 staff based in Bangsar South and Petaling Jaya. Over the next three to five years, the company plans to invest the same amount with the headcount expected to nearly triple to 65.

For Malaysia, the entry of Pickles completes the downstream component of the local auto insurance industry, in addition to introducing a unique skill set that local talent will eventually absorb.

One of the advantages of Malaysia was having a ready clientele and non-existent local competition in the same mould.

Working for Pickles requires a unique skill set, given the specialised nature of auctioneering that Pickles is doing. Malaysian talent,though highly skilled, needed to be trained further to match Pickles unique requirements.  Technologists and an auction facility manager were brought in to further transfer knowledge to the local talents.

InvestKL, an agency under the Ministry of International Trade and Industry, has been there for Pickles every step of the way, Caisse says. “For one, the agency made all processes smoother. InvestKL emphasised the ease of doing business and we took advantage of their relationships with other stakeholders.”

The agency also proved indispensable in guiding Pickles through the bureaucracy of acquiring property for warehousing facilities as well as planning the proper renovations — that included helping the auctioneer navigate the local approval requirements.

Today, Pickles has about 475,000 sq ft in warehousing facilities across Peninsular Malaysia. It has also received formal endorsement from the General Insurance Association of Malaysia.

It has conducted 32 successful auctions.  The company now holds salvage auctions every Thursday with auctions for driveable cars once a month on a Saturday, usually with a turnout up to 150 interested bidders.

Pickles encountered some pushback from the existing wreck-and-scrap vehicle dealers whose businesses were being disrupted by its operations. However, the company is persisting with the support of the insurance industry and intentionally befriending local traders by creating a huge market of new inventory.

In fact, its successful venture in Malaysia has even raised interest among other overseas competitors, who are now looking into the possibility of setting up a base in Malaysia too. When asked about that prospect, Caisse is, however, not worried.

He says Pickles has struck p partnerships with local auto players such as Proton, Sime Darby Hertz Rent-A-Car and Avis, as well as private car dealers and private car sellers to help fetch better sale prices for their used vehicles.

“There’s a huge barrier to entry in our business, and it takes a huge capital outlay to get started, so we are in a defendable position here with a first-mover advantage,” says Caisse.

The automotive sector continued to be a significant contributor to the economy last year and shows potential growth in 2019 and beyond.  The ecosystem around the industry is also growing in tandem with the market needs.

One of the growing sectors in the automotive industry is car auctioning. The business has evolved and  auctioning has gone high-tech and consolidated. One of the major players that has grown globally in this sector is Pickles Auction. And, Pickles has chosen Kuala Lumpur for its Centre of Excellence (COE) and to grow its business in the Southeast Asia market.

For InvestKL, however, fulfilling its mission requires seeing beneath the surface to unearth surprising value for the nation. In the case of Pickles, it sees another thriving opportunity in Malaysia’s digitalisation agenda.

Pickles’ core business activities are surprisingly high-tech. Auctions are open to the public and done live with a licensed auctioneer, who takes bids from onsite and online bidders simultaneously. An audio feed of the auction is available on an app so remote bidders can listen in on the proceedings. Each item for sale is digitally tracked and available for viewing on the company website, in the bidding app, or in person two days before the auction. Every step of the process is recorded and auditable. The extensive use of technology prevents price rigging and unsavoury practices that were rampant previously. That injects transparency and fairness into the market, which helps Malaysian vehicle owners and industry players alike get a fairer value for their auctioned vehicles. With Pickles’ dominance in its home country, it is now ready to expand its horizons further across Southeast Asia, with numerous large markets easily accessible within the Kuala Lumpur’s immediate orbit. That is why the company is investing in its COE in Kuala Lumpur, which is its first outside of Australia.

The COE will focus its resources on developing innovation for data and information technologies, but subsequent phases will also span finance, technology, marketing, and customer engagement as Pickles continues to strive for further customer facilitation.

Earlier this year, the Minister of International Trade and Industry Darrel Leiking reiterated the importance of adopting new and advanced technologies in the Malaysian manufacturing and services ecosystem in order for MNCs and local players to thrive.

Plans for a third national car project will also reinvigorate the Malaysian economy and catapult the country into the ranks of developed economies. This will also benefit the automotive industry, that will support its ecosystem to grow rapidly incorporating new technology ideas.

With a long-term view of the value Pickles is bringing into the digital Malaysian business ecosystem, InvestKL was instrumental in providing support to aid the company in finding its footing.  Among others, InvestKL worked tirelessly to facilitate the onboarding of specialised talents that Pickles needed, as well as connecting the company with government agencies and local universities vis-à-vis future planning for talent production.

The agency under the Ministry of International Trade and Industry, also assisted in providing brand-building assistance. Tasked with attracting large global multinationals to setup shop in Greater Kuala Lumpur, InvestKL has been at the forefront of wooing strategic investments into the capital city.

The agency is always on the lookout for large global multinationals as well as rising stars that will provide great value propositions to Kuala Lumpur. It is always on the lookout for companies that will fit into the broader national agenda of spurring innovation, Industry 4.0 activities and boosting productivity. The criteria are strict. It is looking for services-based MNCs that seek a stepping stone into Southeast Asia while bringing valuable know-how and skillsets to the country and its talent pool.

So far, InvestKL has convinced over 70 MNCs to invest more than RM11 billion in Kuala Lumpur, creating 11,000 jobs for Malaysians in the process.