Zeti leaves a strong legacy, but will she get her choice of successor? 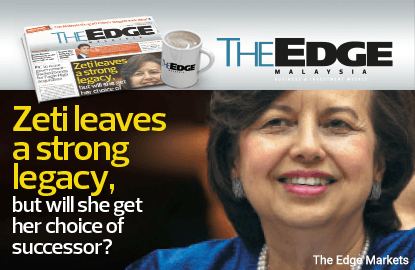 KUALA LUMPUR (March 19): The Edge weekly in its latest edition reported that as speculation intensifies over who will replace governor Tan Sri Dr Zeti Akhtar Aziz when she retires from Bank Negara Malaysia on April 30, one thing is apparent — hers are big shoes to fill and her successor will need to start filling them up fast given the many issues facing the banking sector and the economy.

The weekly said it is a view held by many in the financial industry that she regulates.

The Edge reported that Zeti’s numerous global accolades — including being named one of the world’s best central bank chiefs by Global Finance magazine in 2009 and then seen as a possible candidate to helm the International Monetary Fund (IMF) in 2011 — are testatement to her achievements. 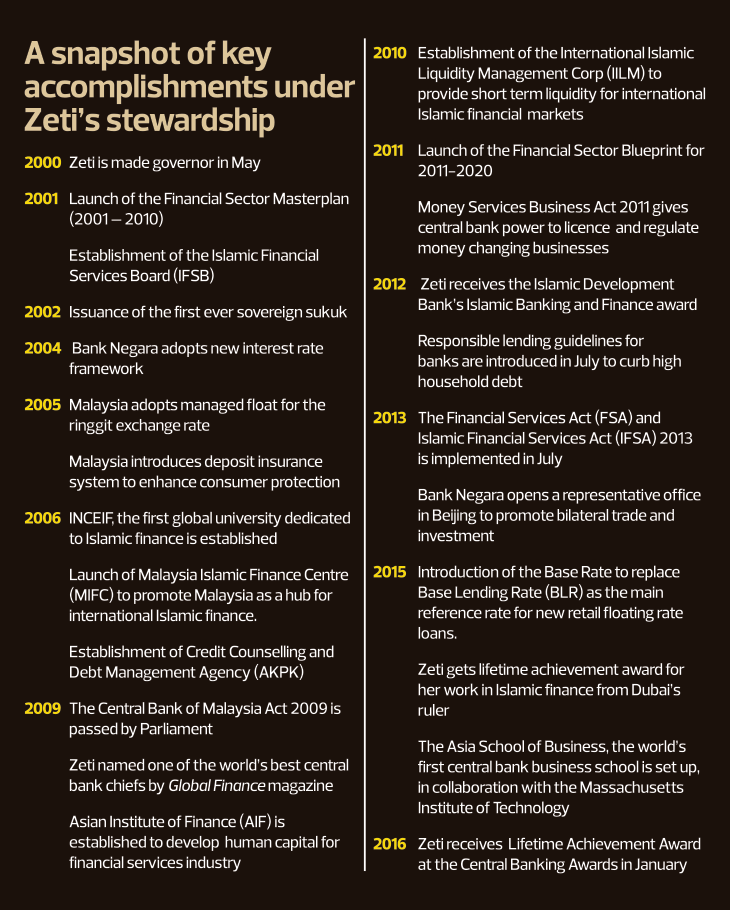 It said her successor will surely face a daunting task measuring up. But given the weaker economic climate and the host of challenges that come with it, the person will have to immediately roll up his or her sleeves and get down to work, senior bankers and economists say.

The weekly said there are critical issues to be dealt with — from the high sovereign and household debt to the low oil price, weak ringgit and rising cost of living — and failure to handle them competently could mean a downgrade in the country’s credit rating by international rating agencies.

“The role and policy framework of Bank Negara is of paramount importance to tackle these issues. Our economy is currently going through a period of adjustment given the continued external uncertainty and the ongoing domestic reforms,” the Edge quoted independent economist Lee Heng Guie as saying.

Just last Thursday, the Ministry of Finance (MoF) revealed in Parliament that the sovereign debt level as at end-2015, at RM630.5 billion, stands at 54.5% of gross domestic product, precariously close to the unofficial self-imposed 55% limit.

And then, there is scandal-ridden state investment fund 1Malaysia Development Bhd (1MDB) that continues to garner international headlines and sour the country’s reputation.

These make it critical for Zeti’s work at Bank Negara to be passed to good, competent and most importantly, politically impartial hands.

The Edge said the government’s list of potential candidates has narrowed in the last few months.

The weekly said that it is now said to be down to Datuk Muhammad Ibrahim, the most senior of the three deputy governors and reportedly the favoured in-house candidate; Datuk Seri Abdul Wahid Omar, Minister in the Prime Minister’s department in charge of economic planning and formerly the CEO of Malayan Banking Bhd; and Tan Sri Mohd Irwan Serigar Abdullah, the secretary general of treasury at the Ministry of Finance (MoF). Mohd Irwan is also on the board of advisers at 1MDB.

The weekly also said Malaysia’s ambassador to the US, Datuk Dr Awang Adek Hussein, was also one of the shortlisted candidates although his involvement in politics with Umno is deemed a liability. It said that according to people who know him, Awang Adek is not keen but will accept the job if selected.

It said only three of the seven governors over the past three decades were non-rank-and-file appointments. Of the three, two were former CEOs of Maybank.

For the full story on views on the next chief of the central bank and challenges facing the candidate, read the latest edition of the Edge for the week of March 21 – March 27.