With zero savings, most M’sians may face dire straits

KUALA LUMPUR: The majority of Malaysians will likely struggle in the event of income emergencies as they have no financial assets and no banking or financial account of any kind, the Malaysia Human Development Report 2013 revealed.

More than half or 53% of Malaysian households have no financial assets, while one in three Malaysians do not have an account, the report commissioned by the United Nations Development Programme (UNDP) said.

Rural households have the highest number without any financial assets (63%), compared to 45% of urban households, and by ethnic group, bumiputera and Malays chalked up the highest figures as those without such assets.

“Among ethnic groups, about 57% of non-Malay bumiputeras and 55% of Malays have no financial assets, with the figure for the Chinese and Indians at 45% and 44% respectively,” read the report which was released in Kuala Lumpur yesterday.

“In other words, roughly one out of two Malays, non-Malay bumiputera, Chinese and Indians have no immediate liquid financial assets, making them vulnerable in the event of an income or employment shock.”

One in three Malaysians had no banking or financial account, while among the bottom 40%, the figure was much higher, at 50%, said the report.

“In other words, one out of two low-income Malaysians do not have any financial accounts. Access to formal credit [or lack thereof] may also be the reason for the absence of financial assets,” it said.

The report stated that while Malaysia recorded a relatively high gross national savings rate, the bulk of the savings came from the corporate sector.

Citing figures from the Household Income Survey, the report noted that nearly 90% and 86% of the rural and urban households, respectively, had no savings, while the majority of households at 88% had zero earnings from their savings.

Meanwhile, 57% of Malaysian households reported zero earnings from investments, with the figure for urban households at 50% and rural households at 66%, according to figures derived from dividend income earned.

The report did not take into account forced savings, such as the Employees Provident Fund (EPF), as households do not have access to such savings in the event of immediate income or employment shock.

But a breakdown of data from EPF savings as at 2013 showed equally worrying information: 90% of Malaysians nearing retirement age did not have enough funds to sustain a basic lifestyle for more than five years.

“In other words, assuming a monthly expenditure of RM900 per month, the savings of the former could sustain their basic lifestyle for 1.8 years, while for the latter, the figure stands at 4.6 years.”

Though alarming, neither the low amount of financial assets nor EPF savings were surprising, the report noted.

It also explained that the low EPF savings were due to the fact that the majority of Malaysians earned low wages.

“As expected, the inequality in compulsory savings is rather extreme, where the top 1.7% of depositors in the EPF have more savings than the savings of the entire bottom 57% combined,” added the report.

The authors said the lack of financial assets, especially for the bottom 40%, severely limited their ability to borrow, invest, save and improve their economic opportunities.

The report was written by Tan Sri Dr Kamal Salih, an adjunct Professor of Economics and Development Studies at Universiti Malaya (UM); Dr Lee Hwok Aun, from the UM Department of Development Studies, and Dr Muhammad Khalid of the Khazanah Research Institute.

The report was published for the UNDP and was sponsored by both the UNDP and the Economic Planning Unit which is under the Prime Minister’s Department. — The Malaysian Insider 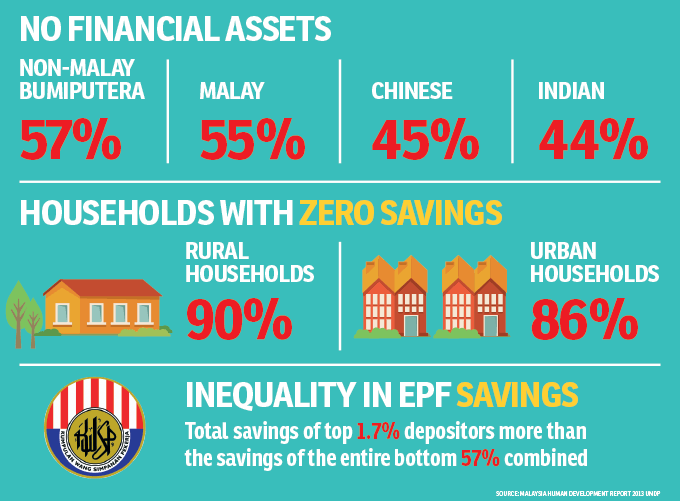 This article first appeared in The Edge Financial Daily, on November 27, 2014.