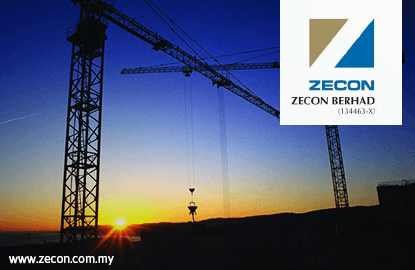 KUALA LUMPUR (Nov 11): Zecon Bhd has inked a memorandum of understanding (MOU) with Universiti Malaysia Sarawak (Unimas) for a planned mixed-property development on the latter's land.

Zecon told Bursa Malaysia that the mixed development would include a hospital and hotel, besides offices and apartments. Zecon said it signed the MOU with Unimas' 100%-owned business arm, Unimas Holdings Sdn Bhd (UHSB).

"Zecon intends to participate in the Unimas Health Metropolis project that involves the development and construction of a 300-bed hospital, 90-bed nurses hostel, an annex academic block and a commercial block consisting a nine-storey hotel and service apartment, a 12 storey apartment, a 10 storey office tower and a three-storey shophouse.

"Zecon has invited UHSB to take a stake in the equity in the special purpose vehicle (SPV), designated to undertake the commercial block of the project in consideration of UHSB providing land for the project," Zecon said.

According to Zecon, UHSB will be entitled to a 20% stake in the SPV.

Zecon said it would be responsible for the design, construction and pricing of the project. The task involves dealing with the authorities for the project's letter of award.

"The MOU will remain in effect for a period of 12 months or until terminated by either party by giving to the other party a three months written notice and may be extended for a further period, as may be agreed by both parties in written prior to the expiry date," Zecon added.