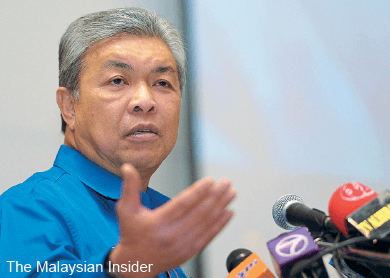 (Aug 18): The 20 Barisan Nasional (BN) leaders accused by a blog of being part of a plot to topple the government are innocent, Deputy Prime Minister Datuk Seri Ahmad Zahid Hamidi said today.

Zahid, who is also home minister, said he had submitted all the information he had on the plot to the police for investigations, and none of the 20 were involved.

"Not a single one of the names published on that blog were approached to sign the statutory declaration (SD).

"I want to confirm that not one of the 20 signed it. So clear their names," Zahid told a press conference in Putrajaya today.

However, when asked whether Umno veteran Tengku Razaleigh Hamzah was involved in the plot, Zahid refused to give a straight answer.

"I leave it to the police to identify the culprits or carry out investigation," he said.

Many of those named have denied all involvement in such a plot, while several lodged police reports against the blog which carried the allegations, Suara Hati.

Zahid said today he could not disclose the identity of the Umno leader he believed was leading the plan to remove the government, saying it could jeopardise police investigations.

Zahid first revealed the plot to topple the government on Saturday and vowed that he would not allow it to happen.

This led to Muhyiddin and Tengku Razaleigh denying any part in the alleged conspiracy. – The Malaysian Insider