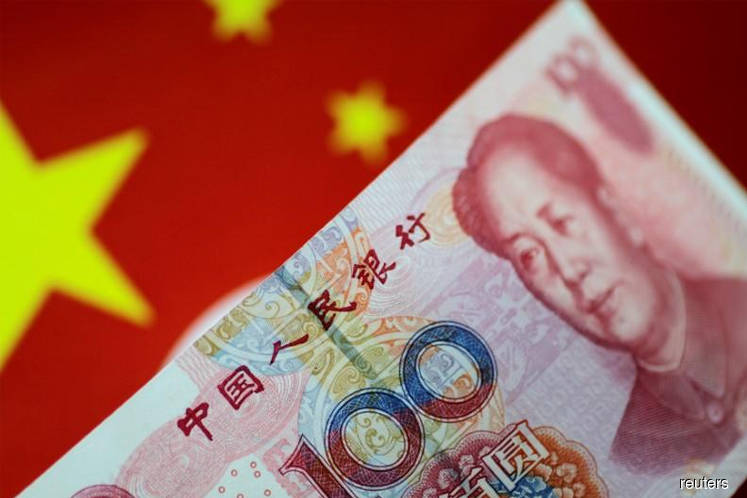 SHANGHAI (May 24): China's yuan inched lower against the U.S. dollar on Thursday on a slightly weakened official yuan midpoint, after the greenback strengthened against the euro on concerns about economic and political risks in the common currency bloc.

In the spot market, the onshore yuan opened at 6.3880 per dollar and was changing hands at 6.3909 at midday, 26 pips weaker than the previous late session close and 0.15 percent softer than the midpoint.

Gao Qi, FX strategist at Scotiabank in Singapore, wrote in a note on Thursday that he expects the yuan "likely to trade between 6.25 and 6.40 (per dollar) with an upward bias amidst a weakened euro".

The global dollar index, a gauge that measures the unit's strength against six other currencies, stood at 93.865 as of midday, compared with the previous close of 94.003.

Xie Yaxuan, analyst at China Merchants Securities, said the yuan is likely to face some headwinds amid the recent recovery in the dollar index.

"(The dollar index) could continue its rebound to 97, and that would pile some depreciation pressure on the yuan in the near term," Xie said.

Market participants say the impact on the yuan trade from trade issues between the United States and China has been limited for now but that they would continue monitoring the progress.

China's Commerce Ministry said on Thursday that it had not pledged to cut the country's trade surplus with the United States by any specific amount, and hopes the United States implements measures promised during recent trade negotiations.

The Thomson Reuters/HKEX Global CNH index, which tracks the offshore yuan against a basket of currencies on a daily basis, stood at 98.44, weaker than the previous day's 98.64.

The offshore yuan was trading 0.10 percent firmer than the onshore spot at 6.3847 per dollar.

One-year NDFs are settled against the midpoint, not the spot rate.