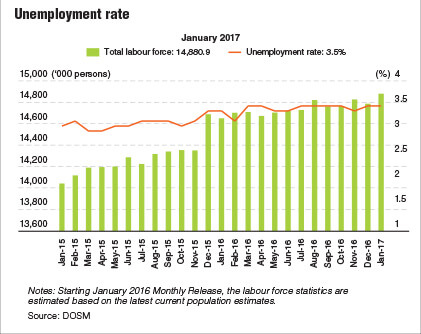 “We don’t have the unemployment breakdown that shows the graduates’ unemployment, but the human resource ministry had mentioned that nearly half a million of people were unemployed and out of that, 200,000 were youths, which meant about two-fifths of the unemployment came from youths,” he told reporters at MIER’s corporate economic briefing yesterday.

This was in line with what was reported in Bank Negara Malaysia’s 2016 annual report that said the unemployment rate among youths was estimated to have increased by 1.2% to 10.7% in 2015 from 9.5% in 2014, over three times higher than the national unemployment rate at 3.1%.

He is of the view that the slower economic growth cannot support the labour market in Malaysia.

“The other issue is the low-income level of Malaysian households,” said Zakariah.

While the jump in February’s inflation — which was the highest in eight years at 4.5% — and the weaker ringgit have reduced the purchasing power of working Malaysians, he noted that the income growth has remained at a relatively low level.

Zakariah also highlighted that the weak ringgit has increased the difficulty of reversing the brain drain from Malaysia.

He said while MIER has so far not looked into some of the issues mentioned but with unemployment issues becoming more prominent in Malaysia, more analysis will be spent on them.

Zakariah also said many issues that have weighed down the country’s economic fundamentals are structural issues, which include the over-reliance on foreign labour, the inability of the economy to go into higher value chain, high household debt, as well as the high operating expenditure (opex) of the federal government.

MIER is expecting the current account surplus to narrow further to RM14.8 billion this year, down 41.3% from 2016.

“If you look at the narrowing current account balance, the decline came from the decline in goods and the widening of the deficit in services, primary income and secondary income. The primary income is basically the repatriation of income of foreign workers to their home countries and the deficit has widened from RM32 billion to RM34.7 billion,” he said.

Apart from the narrowing current account balance, Zakariah said the high opex of the federal government of RM210.2 billion, which was 99% of the government’s revenue of RM212.4 billion in 2016, left very little room for development expenditure.

With domestic demand expected to continue to be the engine of growth in 2017, he cautioned that it is important for the government to address some of the structural issues affecting the country.

While the 1Malaysia People’s Aid scheme will help provide additional disposal income for the lower income group, Zakariah said it is not sufficient to keep the domestic consumption momentum.

MIER is maintaining its forecast of 3% inflation for this year as it expects the rate of price increase to taper off moving into the second half of 2017.

On a more positive note, MIER’s first-quarter 2017 (1Q17) Business Conditions Index (BCI) registered a level of 112.7 points — the highest in the past 10 quarters — a reflection of the optimism in this year’s economic environment.

“The marked improvement of the BCI to 112.7 points from 81.2 points in the previous quarter was in line with the sales and production volume increase as well as the local and export orders that are picking up,” said Zakariah.