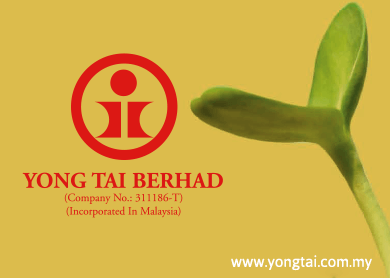 KUALA LUMPUR: Shares in Yong Tai Bhd rose as much as 11.11% or six sen to 60 sen yesterday following the completion of its rights issue with free warrants at end-June.

At the closing bell, Yong Tai’s share price pared some gains and settled at 58.5 sen, still up 4.5 sen or 8.33% with 15.87 million shares done. The current price gives it a market capitalisation of RM70.4 million.

The counter was actively traded after the announcement of the corporate exercise on June 24 and trading volume peaked at 17.8 million yesterday.

A remisier said the share price rally could be due to the completion of the corporate exercise, as well as the emergence of new substantial shareholders in the company recently.

“New shareholders coming into the company have also boosted the confidence of investors on the future development of the company,” he told The Edge Financial Daily.

To recap, Yong Tai had on June 25 completed its renounceable rights issue of 80.23 million shares with 40.12 million free warrants on the basis of two rights share for every one Yong Tai share.

Yong Tai, which ventured into property development last year, recently completed its 29-storey serviced hotel The Pine (formerly known as 99 Residence) in Melaka. The hotel will be run by its joint-venture partner PTS Properties Sdn Bhd.

The company has another hotel and serviced apartment — The Apple — in the pipeline. The hotel will be operated by Courtyard by Marriott, which has signed a 20-year contract.

The garment maker-cum-property developer’s share price has been on an upward trend of late. It has risen 23.16% since last Thursday, when it was trading at 47.5 sen.