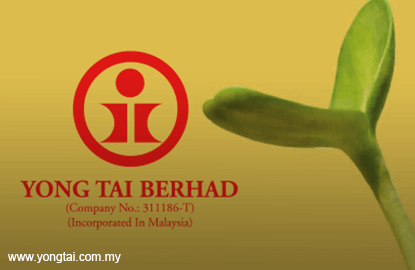 KUALA LUMPUR (Oct 26): Garments manufacturer and retailer Yong Tai Bhd, which is planning a mixed development next to a seafront tract where it will stage the ‘Impression Melaka’ stage performance for 30 years, today inked the agreement to acquire the land for the project.

It entered into a RM37 million conditional sale and purchase agreement (SPA) with Admiral City Sdn Bhd (ACSB) for the proposed acquisition of a 17-acre seafacing tract, dubbed ‘Impression Land’, in Melaka, according to its filing with Bursa Malaysia.

Yong Tai is also buying from other vendors, the entire stake in PTS Impression Sdn Bhd, which has a licence from China-based Impression Wonders Art Development Co Ltd to produce and stage the ‘Impression Melaka’, for RM3 million.

The performance will be part of its intended eight-year master development on 100 acres adjacent to the Impresion Land, which is expected to have an estimated total gross development value (GDV) of RM5.4 billion and estimated gross development cost of RM3.8 billion, giving rise to potential pre-tax return of RM1.6 billion.

It has also signed a conditional joint development agreement with the landowners, ACSB and its subsidiaries, for the said development.

This was pursuant to its announcement on Aug 3 that its wholly-owned unit, YTB Impression Sdn Bhd, has entered into a memorandum of understanding with ACSB to develop the land into a theatre to produce and stage live-scale tourism performances, known as the ‘Impression Melaka’.

Meanwhile, Yong Tai has also entered into a joint development agreement to develop a luxury service apartment project at Jalan U-Thant, Kuala Lumpur, which carries a GDV of RM168 million, with the acquisition of Yuten Development Sdn Bhd.

This means the proposed Melaka and KL projects carry a GDV of about RM5.57 billion.

“The acquisitions will pave the way for the group to tap into the growing property development business segment in Malaysia. We deem these acquisitions as strategic investment and expect it to contribute positively to the Group’s future earnings in the years to come. Moving forward, we are planning to launch a few projects next year,” said Yong Tai's director Boo Kuang Loon in a statement.

All the deals are expected to be funded through a combination of internally-generated funds and/or bank borrowings.