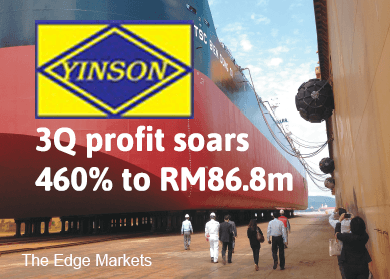 The substantially higher profit was attributed to the RM20.9 million gain on the disposal of a subsidiary and stake in a joint-venture, increase in foreign exchange gain of RM24.8 million, and higher contribution from its marine segment, Yinson said in a filing with Bursa Malaysia.

According to Yinson, its marine segment revenue was up by RM223.4 million compared to the previous corresponding period, due to the contribution from YPAS.

Contribution from the JVs increased to RM73.5 million from RM25.5 million previously, mainly due to the RM28.9 million contribution from a floating, production and storage and offloading facility (FPSO) operation, it said.