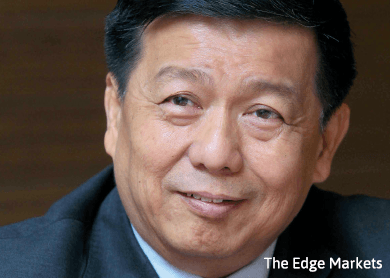 It had initially met the target when it was awarded the Jesselton Residences Waterfront project in 2013.

According to managing director Lim Chong Ling (pic), the mechanical and electrical (M&E) firm has its work cut out to replenish and meet its RM500 million order book target, in part due to its efforts to clinch more power plant projects.

“At the moment we have tendered for RM500 million [worth of projects] up to December 2014. I expect we can secure about 30% of that over the next 12 months,” Lim told The Edge Financial Daily in an interview.

This will bring its order book up to at least RM350 million by end-2015 from RM200 million presently. The tenders are for construction-related M&E service jobs.

In November, Palikota terminated the Jesselton contract citing a delay in the works, and called on a performance bond worth RM12.8 million. The project was contracted in August 2013 and was due for completion in August 2015.

“We found that the construction progressed at an unexpectedly slow pace due to various technical issues,” Lim said.

He said the project is currently 12% completed based on monetary terms, but 20% completed by way of work done.

“As we carried out the work we have been regularly highlighting technical issues to the clients and engineers. Sometime in August, we submitted for an extension of time,” Lim said.

Both parties were in discussion when Palikota served YFG the notice of termination, said Lim, adding that this was unlawful because Palikota had not considered YFG’s application for extension before the termination.

YFG was later granted an injunction by the Kuala Lumpur High Court to prevent Palikota calling upon the bond until YFG’s counterclaim that there was a breach of contract has been heard and decided. The inter-parte hearing that was set for Dec 9 has been postponed to Jan 5, 2015.

“To call upon the performance bond, [Palikota] has to prove that they have ascertained damages ... At the moment, there are none,” Lim said.

That being said, YFG expects this to minimally affect the company as it has already claimed RM18 million in revenue from Palikota against the RM20 million so far incurred.

Meanwhile, YFG hopes to change its income profile in the coming years.

“Last year, 30% of our revenue came from M&E and 70% from civil engineering. We would like the recurring income business to be at least 50% of the group’s revenue,” Lim said, adding that this would mean building and owning more power plant concessions.

“We are exploring a few biomass power plant projects, but we have not made any submissions to the Sustainable Energy Development Authority yet. We hope, over the next 12 months, we should have one or two recurring income businesses in place,” he said.

But first, it wants to focus on a RM110 million biomass power plant in Bera, Pahang, where it is the engineering, procurement and construction (EPC) contractor for a 13mw plant.

YFG expects it could take another 18 months to complete. The Bera power plant is expected to contribute RM23 million in revenue per year, Lim said.

In February this year, YFG also signed a memorandum of understanding with Indonesian company PT Impha Nusantara Mandiri to be its EPC contractor for a 12mw hydro power plant in Banten, Indonesia.

“We are still pending the signing of the power purchase agreement with Indonesian utility company PT Perusahaan Listrik Negara. This might take a year, but once approved, it will take us 18 months to complete,” Lim said.

That said, YFG’s 20% stake in the venture will not provide a recurring income stream.

In order to diversify its income streams, YFG needs to strengthen its balance sheet so as to undertake larger projects, and Lim is not discounting mergers and acquisitions.

Last month, YFG had proposed a private placement of up to 96.75 million new shares of 10 sen each, which could raise some RM5.44 million to RM9.68 million, the bulk of which will be used for working capital.

“We are hoping to pare down our borrowings by about 20%, based on the minimum placement of RM5.4 million,” Lim said.

As at end-September this year, YFG’s total borrowings came to some RM25 million, against cash and bank balances of RM1.5 million. Net assets stood at 4.7 sen per share.

For the financial year ended June 30 (FY14), YFG slipped into the red, reporting a net loss of RM4.28 million against FY13’s net profit of RM4.6 million, even though revenue rose to RM152.53 million from RM135.78 million over the same period.

The group attributed this to the recognition of additional costs on completed projects, fair value adjustment on outstanding debts and liquidated and ascertained damages totalling RM8.1 million.

The counter closed down 7.14% at 6.5 sen last Friday, bringing a market capitalisation of RM39.59 million.