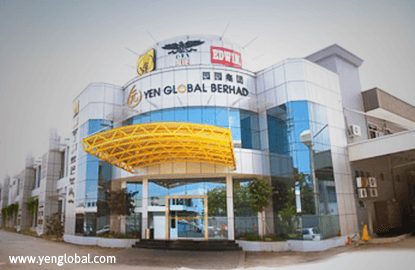 According to Bloomberg data, Yen Global's shares were moved in eight direct business transaction blocks, at 50 sen per share, which is 15 sen or 23% lower than the 65 sen closing price of its shares today.

According to Yen Global's latest annual report, its executive chairman Goh Kok Beng and former managing director Goh Kok Heng, the largest shareholders, have a deemed interest of 24% in the company via their shareholdings in Extreme Lifestyle (M) Sdn Bhd.

Meanwhile, a filing with Bursa Malaysia dated June 17 showed that Taiwan-based Gemtek Investments Co Ltd had emerged as a substantial shareholder in the group after acquiring 12.5 million shares or a 9.09% stake in Yen Global, via private placement, at 52 sen per share.

The closing price of Yen Global's shares of 65 sen today is 5.5 sen or 9.24% higher than the previous close, and values it at RM89.38 million. Some 1.53 million shares were exchanged. Year to date, the counter has risen more than 51%.