KUALA LUMPUR: China-based Xingquan International Sports Holdings Ltd is seeking to double the contribution of its self-operated point of sales (POS) to its revenue in the next three to five years, as the model is expected to double the profit margin it obtains from selling via its network of distributors.

Hence, the group plans to open another 200 self-operated POS in the same period in China and will invest 1 million yuan (RM562,176) into the opening of each new store, Xingquan’s non-executive director Ooi Guan Hoe told pressmen after the group’s annual general meeting yesterday.

The 1 million yuan investment per outlet includes renovation as well as a year’s stocks, staff costs and revenue sharing of between 20% and 25% with the departmental store, he noted.

“Now we have 120 self-operated POS in China, but it is only contributing 10% to 15% to our group revenue. Probably when we have 250 to 300 stores, we can then see the revenue contribution go up to 30% to 40%,” Ooi said, adding that the margin is definitely higher when selling via its own POS. Xingquan, which also sells its shoes, shoe soles, accessories and apparel via distributors, first launched the self-operated POS model in departmental stores in 2012. The latter gives it 60% in gross profit margin, compared with the distributor network’s 30%.

“We hope to have around three distributor shops to one self-operated POS [eventually],” said Ooi.

On prospects, the group remains optimistic despite the slowdown of the Chinese economy and increasing competition with online shopping sites.

Xingquan started selling its products online this year through some online partners, said Ooi, though revenue is still small — less than 10% of the group’s revenue currently.

“Our product is men’s outdoor casual wear, which is slightly mid- to high-end, so our target market [of up to 45 years old] still prefers to drive to shopping malls to feel and try the product,” he said, adding that despite the fall in China’s gross domestic product, the value of retail sales has been increasing and will continue to increase.

“I believe China currently has more than 3,000 departmental stores and we have only 120 self-operated POS. So, there are still a lot of expansion prospects in China,” he added.

The group on Dec 26 announced an interim dividend of 2 sen per share but remains non-committal to a fixed dividend policy, despite the better growth prospects. 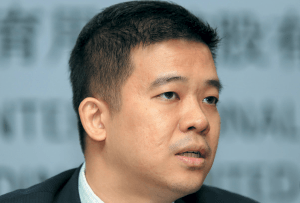