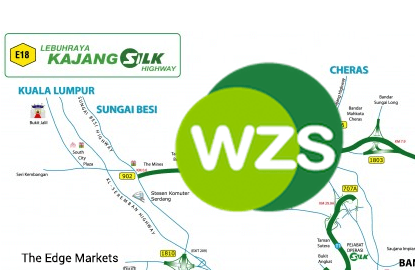 "It is the intention of WZ Satu to acquire SILK together with other co-investor(s) to be identified, on the basis that WZ Satu will be the majority shareholder," it said in a filing with Bursa Malaysia.

WZ Satu said the purchase consideration will be satisfied via cash of RM239.25 million and the issuance of 125 million shares in WZ Satu at an issue price of RM1.03 per share.

"It is the intention of WZ Satu at this juncture that the cash portion of the consideration will be substantially funded directly by the co-investor(s) and the remaining portion will be funded by the company's internal cash and/or fundraising which may include a rights issue and/or placement of new shares," it said.

WZ Satu said the acquisition will not result in a significant change of business direction of the company.

WZ Satu is the third company to express an interest to acquire SILK.

In May 2014, IJM Corp Bhd had proposed to acquire SILK for RM398 million cash, but the deal was called off mutually following the non-fulfilment of certain conditions precedent within the agreed timeline.

The next to express interest, in September last year, was Taliworks Corp Bhd, which owns a 55% stake in Cerah Sama Sdn Bhd, the concessionaire for both Cheras-Kajang Highway and the New North Klang Straits Bypass Expressway.

"There are some terms that need to be finalised, which [includes] toll hikes in October (2015). The traffic volume has come down after the hike. This is one of the factors we need to consider when we work out the purchase price," Chin had said.

It appears that Taliworks had decided not to proceed with the acquisition.