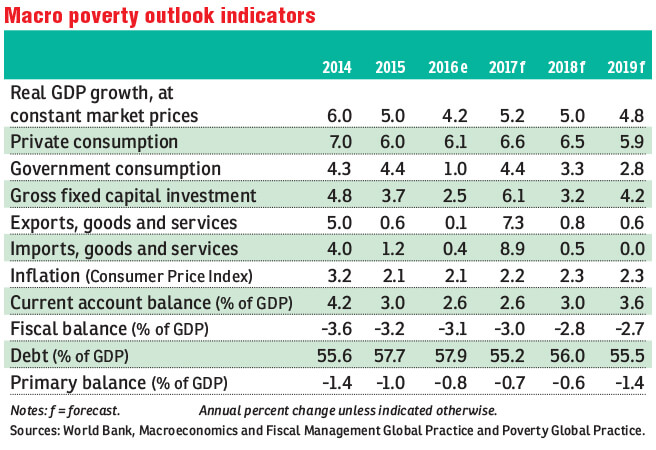 KUALA LUMPUR: The World Bank has raised Malaysia’s gross domestic product (GDP) growth target to 5.2% from 4.9% for 2017 — a faster pace compared with Bank Negara Malaysia’s forecast of between 4.3% and 4.8%.

However, the World Bank in its semi-annual review of the region’s developing economies pointed out that the ongoing adjustments to the rising costs of living amid continued fiscal consolidation and elevated household indebtedness could weigh on the strength of private consumption in Malaysia.

Nevertheless, the bank said with faster-than-expected GDP growth working in support of fiscal consolidation efforts, Malaysia’s budget deficit is projected to decline to 3% of GDP in 2017, and further to 2.8% and 2.7% of GDP in 2018 and 2019 respectively.

“The World Bank’s assessment is that an appropriate pathway of public sector scale consolidation has put Malaysia’s debt on a sustainable pathway over the medium term,” it said.

The report added that in some countries in the region, these deficits are especially worrying in cases where public debt is also high or rising. It is a combination of the two that poses risks to fiscal sustainability as the combination narrows governments’ policy space for responding to shocks.

World Bank lead economist for Malaysia, Richard Record, said various measures were taken for fiscal consolidation, including the implementation of the goods and services tax to narrow the budget deficit.

He does not foresee the country’s debt-to-GDP ratio to rise further as it is under the ceiling of 55% currently. “The risks are more looking ahead, and what are the shocks that could impact Malaysia’s economy, and how it would respond,” he said.

Malaysia, being an open economy, is vulnerable to shifts in external demand and market sentiment, he added.

Because of global uncertainty, the government’s fiscal prudence is crucial as Malaysia has experienced significant impact on public revenue and finances as a result of low commodity prices.

As such, it suggests the government to have advanced tax reforms in order to create fiscal buffers, including broadening the base of personal income tax and reducing exemptions from the general sales tax.

This could enhance revenue collection while addressing the rising civil servants’ salaries and pensions that could contain the expansion in operating expenditures.

The World Bank also highlighted that accelerating structural reforms to improve both private sector productivity and public sector efficiency should be accorded significant priority for Malaysia to sustain its current growth momentum in the medium term.

“This is to ensure that the GDP growth is not a blip in the chart but the beginning of a longer-term trajectory to move Malaysia into high-income nation status and beyond,” he added.

For 2018, the World Bank anticipates that Malaysia’s stronger-than-expected growth this year might not continue on the same rate next year because of the expected slowdown in the advanced economies and China.

The Malaysian economy is expected to normalise its current growth momentum into 2018 (5%) and 2019 (4.8%) albeit at a more moderate pace amid expectations of lower capital expenditure growth.

“In the medium term, we expect growth in the Chinese economy to gradually see a slow rate in growth, and as the economy restructures, it would have an impact on the demand for Malaysian tradeable products such as from the value chains in the electrical and electronics sector which Malaysia is exposed to,” the World Bank said.