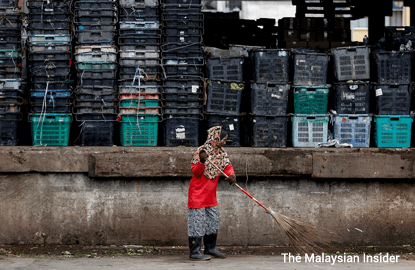 The “Malaysian Economic Monitor: Immigrant Labour” study, also stated that contrary to popular belief, foreign workers do not take away jobs from locals or depress wages for most Malaysians.

In fact, unskilled migrants had a bigger negative impact on wages of other migrants compared to the wages of unskilled Malaysian workers, said World Bank economist Dr Mauro Testaverde.

The problem with Malaysia, said another World Bank expert, Dr Ximena Del Carpio, was its policy on foreign workers was fragmented and not aligned to its overall human resource strategy.

The report comes on the back of a public outcry over Putrajaya's move to bring in 1.5 million Bangladeshi workers over the next three years.

That plan, however, has been temporarily frozen while Putrajaya carries out another rehiring programme for illegal foreign workers.

A similar amnesty programme was implemented just two years ago.

Results from the study show that for every 10 new migrant workers in a given sector, 5.2 new jobs are created for Malaysians.

“This is due to relocation,” said Testaverde in a presentation of the study at Universiti Malaya’s Development Studies Department in Kuala Lumpur.

“For instance, as more foreign unskilled labourers are hired, a company is able to expand and create new medium skilled jobs which will be taken up by Malaysians.”

The report also stated that a 10% increase in migrants coming in slightly increases overall wages of Malaysians by 0.14%.

The wage increase is largest for Malaysians with at least some secondary school education who tend to be supervisors and managers, the report said.

“But (the flow of migrants) reduces significantly salaries of immigrant workers already in the country by 3.94%,” the report said.

More foreign workers also decreases the wages of unskilled Malaysians, who comprise 14% of the total labour force, by 0.74%.

“This class of workers do need some protection and training to upskill and move up the value chain. This is where money from foreign worker levies should be used,” Testaverde said when met later.

However, the proportion of unskilled Malaysian workers is shrinking, he said, as more and more locals get better educated.

Del Carpio, who is a senior economist, said Putrajaya’s foreign worker policy needed to be market-driven, evidence-based and tied to the agency which handled overall human resource strategy.

Problems such as discrimination between locals and foreigners for jobs, wage discrepancies and abuse of migrants, she said could be reduced if Putrajaya adopted the above strategies.

“Another problem is enforcement, which right now tends to look only at the security aspect. More enforcement of labour standards and laws would also reduce these problems,” said Del Carpio.

The full report can be obtained here.