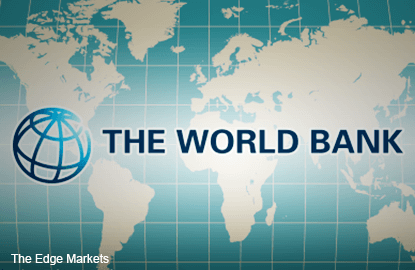 KUALA LUMPUR (Jan 7): Malaysia's economic growth is likely to slow to 4.5% this year and 2017, marginally lower from an expected 4.7% in 2015, on slowing domestic demand, said the World Bank.

According to the World Bank's January 2016 Global Economic Prospects report released today, growth in the East Asia and Pacific region is projected to slow to 6.4% in 2015 and 6.3% this year, from 6.8% in 2014, due to continued growth deceleration in China and in commodity exporters, including Indonesia and Malaysia.

"Despite the slowdown in commodity exporters, growth in the region excluding China was broadly flat (4.6% in 2015), thanks to strong performance in commodity importers, especially in Vietnam and the Philippines, and a moderate recovery in Thailand.

It also noted that slowing growth in China is expected to offset a modest pickup in growth among members of the Association of Southeast Asian Nations this year.

"The region is expected to benefit from the strengthening recovery in advanced economies, low energy prices, improved political stability, and continued favourable conditions in global financial markets, despite anticipated monetary policy tightening in the United States (US)," said the World Bank.

Meanwhile, the World Bank warned that the possibility of greater financial market volatility and restricted credit are risks to the growth.

"A steep appreciation of the value of the US dollar and a slower-than-expected acceleration of high-income economies would also dent growth prospects in the region.

"For policy makers in China, a key short-term challenge is to rebalance the economy towards a more consumption- and services-based growth model while limiting financial vulnerabilities. Countries that are heavily reliant on trade with China may need to diversify their economies," it said.

The bank also sees that some countries in the region, such as Mongolia, Papua New Guinea and Vietnam, will need to deal with high budget deficits.

"Countries such as Indonesia, Malaysia and Mongolia would benefit from lesser reliance on commodity-related revenues. State-owned enterprise reforms, including measures to strengthen transparency and governance, would reduce contingent fiscal risks in China, Thailand and Vietnam," it said.

"Deepening regional trade and investment would boost economic activity and create jobs," added the World Bank, which is of the view that the controversial Trans-Pacific Partnership trade accord, if implemented, would lift trade and growth in the region.