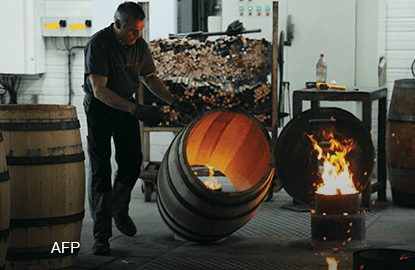 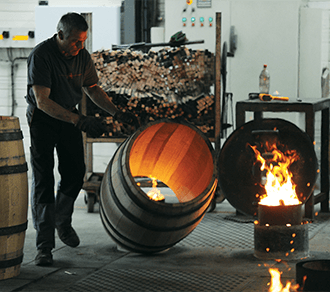 Crafted by artisans using high-quality oak, “Made in France” wine barrels — in which age some of the world’s most expensive wines — are selling like hot cakes abroad, with exports making up 70% of the market. The barrels house an elite club of wines, with only 2% to 4% fermenting in these prized oak containers. Other wines usually age in concrete or steel tanks.

While the barrel market dipped slightly in 2014 after 20 years of solid growth, the industry is still going strong. “The barrel market has reached maturity,” said Jean-Luc Sylvain, who heads the French Federation of Coopers (Federation des tonneliers), or barrel makers.

For most manufacturers, it’s all about the wood. One doesn’t necessarily have to be a wine connoisseur to know that the drink gets much of its flavour from the wood it is stored in — oak in particular. “The key to the business is the selection of the wood,” said Francois Moriniere, director-general of Oeneo, a company that produces barrels and casks.

That’s why coopers employ full-time wood buyers, an important part of the barrel making process. These wood wizards crisscross the country in search of the perfect raw material. “We work with French history,” said Gael Morrissonneau, buyer for French company Radoux, which controls about a quarter of the global barrel market.

One of the best woods to make wine barrels is sessile oak, dating back to the plantations started by Jean-Baptiste Colbert, finance minister for France’s legendary King Louis XIV, initially to build ships. Now some of the country’s highest quality oaks are found in the forests of Berce, Loches, and Troncais in western and central France. The wood grows slowly, which gives it a high-quality grain.

A single oak can cost up to €2,500 (RM10,333) — a price that only the niche cooper industry can afford. And prices are known to spike sharply higher, said Morrissonneau, because many auctions are blind, prompting buyers to offer elevated prices for prized trees.

Often only 20% of the wood is even used to make the barrels, with the rest of it going to paper mills or made into “wood for oenology” — which includes woodchips winemakers in some countries add to the grapes to give them a “woody” flavour.

The barrel making process can take several years. After being cut, logs are left to dry out for two to three years in a highly controlled environment to avoid contamination. Then comes the special process of sorting the wood for the barrels. Originally, this was done by the naked eye, with coopers evaluating each piece of wood based on the growth rings. But now manufacturers are using high-tech methods to help clients achieve the best flavour profile.

At Radoux, for example, the staves — strips of wood that make the sides of the barrel — pass under an infrared sensor that “gives information on the type of chemical bonds in the material”, said Nicolas Mourey, head of research and development at Radoux.

And at Seguin-Moreau, part of the Oeneo group, the chemical composition of each piece of wood is evaluated via a mathematical model to predict the wood’s “oenological potential”.

The staves are then heated and slowly tightened into a barrel shape — a magical moment that “reveals the aromas, sugars, vanilla and chocolate,” said Pierre-Guillaume Chiberry, sales manager at Radoux.

While these coopers use techniques that are centuries old, they also follow the latest trends in the wine market. In the 1980s the “woody” taste was very popular, led by the influential American wine critic Robert Parker. “Clients today ask us for barrels that emphasise more [on] the fruit,” said Sylvain. — AFP