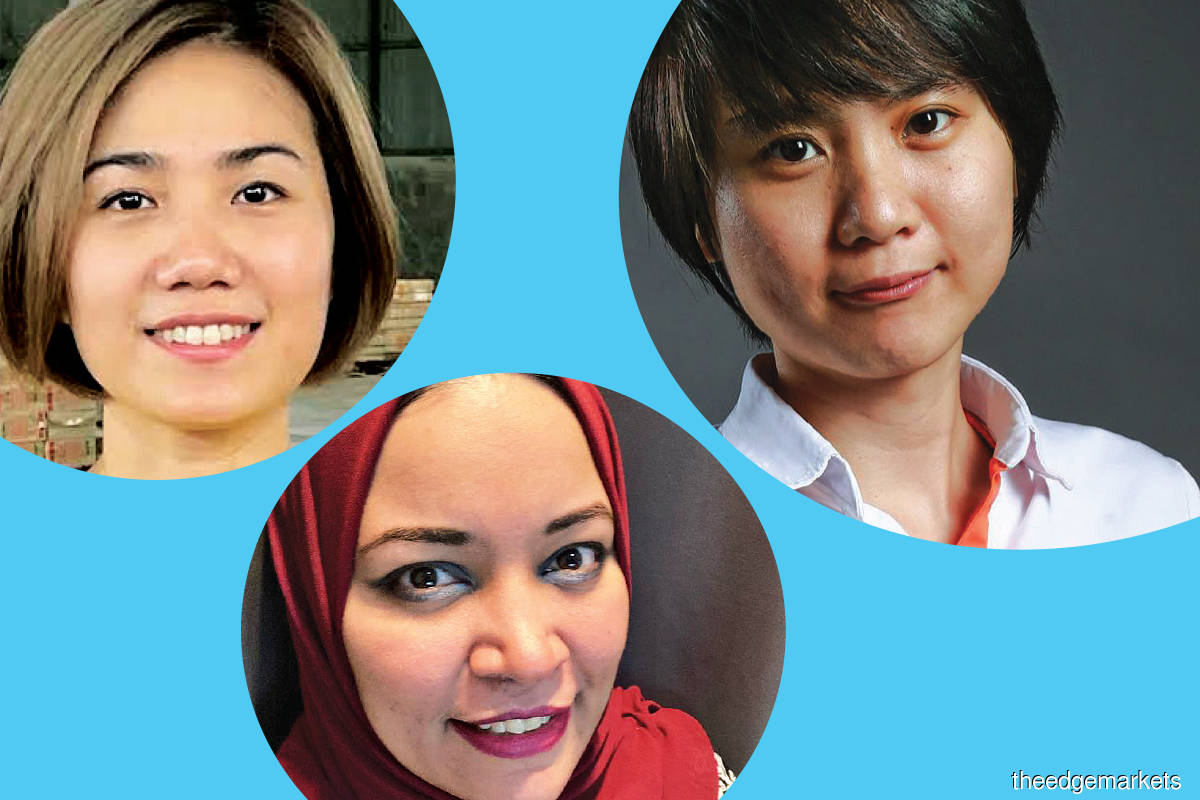 Women and girls experience the effects of the pandemic differently, and usually disproportionately, compared with men. According to the World Bank Group, this includes gendered implications in relation to health, education, economic conditions as well as agency, that is, the capacity to make their own decisions.

But they can also be agents of change by becoming entrepreneurs and actively participating in the solutions to this gender imbalance. At the moment, however, women entrepreneurs face a lack of support globally, not only because of cultural and perception biases, but also because they face greater difficulty in raising funds, according to the Organisation for Economic Cooperation and Development.

As such, with the ravages of the pandemic, supporting women entrepreneurs has become more important than ever, especially in the technology sector where existing and emerging technologies in female-founded companies can be used to promote and advance gender equality.

A simple example would be e-commerce. According to a report by the International Finance Corp (IFC), if the gap in sales between female and male vendors could be closed by 2025, it would add some US$280 billion to the Southeast Asia e-commerce market between 2025 and 2030.

“E-commerce in Southeast Asia is thriving. However, widespread differences between men and women in digital and financial inclusion continue to hold back women entrepreneurs,” says Makhtar Diop, managing director of IFC.

It is also important to note that women face different challenges depending on factors such as geographical location and cultural norms. Digital Edge spoke with three women entrepreneurs who utilise technology in their businesses, for an insight into their personal journeys.

Pennie Lim, founder and CEO of Homa (homa2u.com), displayed a go-getting spirit even as a young girl. Having once worked at chicken rice shops behind her parents’ back as well as making a substantial profit from selling items on eBay while in college, she discovered that she had both passion and talent for selling and for starting new ventures. “I even sold hotel shampoo bottles to my classmates at the time. It seemed exciting and fun to me as a kid, and I would look forward to having trips with my family,” Lim recalls, as these trips were where she sourced the items she would later sell.

“We were bootstrapping until we raised our first funds on a crowdfunding platform in late 2019,” she says. “I have a group of entrepreneur-friends and we give each other a lot of support. What’s most important, though, is the understanding and expectation from your other half.” - Lim

The first thing Lim did upon raising the funds was to draw a monthly salary of RM2,500 for herself. Homa had managed without loans until then because it kept its burn rate low with as lean a team as possible.

Homa was launched in 2017 and its concept caught on quickly. In two years, the start-up was making millions of ringgit in revenue. She adds that currently, it has secured more than RM2.8 million in funding.

While the company may look like an overnight success, Lim admits it has been a tough journey and she would not have made it without the support of those around her.

For someone like her who had to juggle both family and business, it was doubly difficult. She was sometimes subject to impertinent questions from her peers who wondered why she needed to work so hard instead of staying home and taking care of her kids. A woman’s role, they averred, was being in the home.

Lim says this pervasive discrimination and negativity do wear women down. “We can be drained by these negative views from society. Depression and mental health issues are likely, especially if the husband or partner is not understanding or supportive.”

Lim adds that unlike many, she had a supportive partner who did not want her to have any regrets, as well as parents and in-laws who helped with childcare during especially busy periods.

But she points out that it is important for women entrepreneurs to have the right support network outside of the family. “I have a group of entrepreneur-friends and we give each other a lot of support. What’s most important, though, is the understanding and expectation from your other half. If you both don’t agree, maybe at the end of the day, you would have a successful business but you may lose your family. Understanding and trust from the spouse is important, and not everyone has that.”

Believe in your power

“If you see it in your mind, you can hold it in your hand,” is the quote that motivated Egypt-born Nahed Bedir Eletribi, who was determined to make waves in the e-waste sector.

ERTH (E-waste Recycling Through Heroes) is a digital platform that provides free and on-demand electronic waste recycling services to individuals and businesses, in exchange for cash payments. Nahed co-founded ERTH alongside her partner Mohamed Tarek El-Fatatry to fill a gap in the e-waste ecosystem, which was that of a proper collection system.

“Everyone has e-waste but a large majority of people do not make time for recycling and proper disposal. Giving them cash rewards as incentives changes the game, especially since we pay higher prices compared to public recycling centres.” “My message to any woman is that we have unlimited power. We can think, lead, seek opportunities, and create new and better trends.” - Nahed

This is possible because of ERTH’s unique accelerated supply chain, she says.

Being a foreigner starting a business in a new country comes with a different set of challenges.

“We chose Malaysia to start ERTH for various reasons, both social and logistical. I visited once for a conference in 2016 and fell in love with the land. Egypt’s population is more than three times that of Malaysia. This means three times more trash, and three times the complexity. It made sense to start here and think about expansion after.

According to the World Economic Forum’s 2020 Global Gender Gap index, which measures gender equality, Malaysia and Egypt ranked 104 and 134 respectively out of the 153 countries covered.

“But, I was still a foreigner. I had to learn the local language and our company was also too small and unknown during the start. We were very lean but our network eventually improved when we dealt with the challenge of raising awareness about e-waste recycling.”

Like most businesses, the pandemic brought new obstacles. “Our order volume actually increased during the lockdown period. People were at home, ready to recycle, and there was a huge business pipeline,” she says.

In response to this, Nahed says the team set up 24/7 recycling boxes in front of their warehouse as well as around the Klang Valley. “Our revenue actually doubled after the first MCO ended. I think Covid-19 teaches us that anything can happen. You have to be able to adapt,” says Nahed.

A total of 350 tonnes of e-waste has been recycled and the team has raised US$100,000 through equity and non-equity funding programmes as of this year, adds Nahed. Its clients include Petronas, Shell, DHL, the Ministry of Health and Village Grocer.

Before she co-founded ERTH, Nahed taught English. She eventually quit to form a social enterprise serving home-made meals to the homeless. It was a women-led organisation that helped get her nominated to join a global entrepreneurship summit in Silicon Valley.

It was at this summit that she met her co-founder and now-husband, El-Fatatry.

Today she wants to inspire other women, the way her own mother, a teacher who ran a woman-centred non-governmental organisation in Egypt, inspired her. “My message to any woman is that we have unlimited power. We can think, lead, seek opportunities, and create new and better trends.”

At an early age, Jazz Tan had to think about how to survive and make ends meet. For most of her life, it had been just her mother and herself as her father left them when she was only 14. “I wouldn’t be here today without her. Essentially, she had to be a single mother because my dad wasn’t really around,” Tan says.

She worked part-time in coffee shops and sold prepaid SIM cards to put herself through secondary school. Even though the work exhausted her, she studied hard and eventually received a full scholarship to do a diploma in computer science at KDU Penang. “I really wanted to help other youth who may be in a similar situation. They are the key to our future, and need to be equipped with the relevant networks.” - Tan

Tan started YToday Sdn Bhd (YToday) — the company that owns YouthsToday, a youth engagement platform that matches student projects with brand sponsorships — at 18 when she was still in college. YouthsToday also facilitates youth development projects across the country. After she graduated from college, she earned a partial scholarship to go to university, taking a loan to cover the remaining amount.

“YouthsToday actually generated enough revenue to support my education and for me to pay my loan.”

To date, Tan says, the platform has about 100,000 student leaders. “I really wanted to help other youth who may be in a similar situation. They are the key to our future, and need to be equipped with the relevant networks.”

Currently, Tan is focused on a new product, Fuhla. “Fuhla works with small and medium enterprises in Malaysia to recommend apps to users; those who try out the app will be rewarded with promotions, discounts and cash.

“We’re barely a year old, but our revenue is already RM250,000 and we have about 120,000 users. The product market fit is clear as there are so many applications out there, and users should be rewarded if they try them out and provide feedback,” she explains.

When she started her first business, Tan recalls not having enough time to study. “My mom was also worried about my health as I would normally still be awake during the early hours of the morning. But, she came around and became more supportive when funding came in.”

To date, Tan adds, YToday, the parent company of both YouthsToday and Fuhla, has raised about US$450,000 (RM 1.85 million) in investments.

Raising funds was a long and tedious process that was very male-dominated and riddled with automatic assumptions and biases. “My male business partner or team member would often be mistaken for the CEO.”

However, Tan did not get to where she was by being overly sensitive. “I would just introduce myself to the potential investor and use data to back up what I said. Usually, my results spoke for itself.”