This woman could revive Japan 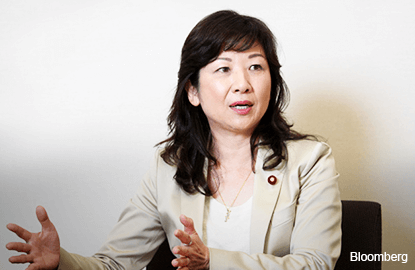 ANYONE wondering why Japan is skirting yet another recession should spend an hour with lawmaker Seiko Noda.

In a nation that chronically underappreciates the talents of women (Japan trails Saudi Arabia and Bangladesh in terms of the number of females in politics), Noda is a trailblazer. In 1989, at 37, she became Japan’s youngest post-war cabinet member.

Her skill in navigating around the jeers and contempt of male colleagues caught the attention of then-Japanese leader Keizo Obuchi, who famously dubbed Noda “the future candidate for female prime minister.”

Now Noda is taking that notion out for a test-ride, quietly seeking support to challenge Prime Minister Shinzo Abe in party elections later this month. Her rallying cry: Abe’s government has ignored economic reforms and demographic challenges to the detriment of Japan’s global status. While Noda’s odds of ousting Abe are low, her message is vital.

Abe came to power in December, 2012, with a mandate to put Japan back on top. China’s gross domestic product had just surpassed Japan’s, as President Xi Jinping rolled out an ambitious charm offensive in Asia.

Abe’s Liberal Democratic Party won over voters with pledges of shock therapy to end deflation and raise living standards. But it was an audacious bait and switch. Abe’s real agenda was tightening government secrecy laws, restarting nuclear reactors Japan came to fear after the March 2011 earthquake, and “reinterpreting” the nation’s pacifist constitution so that it can send soldiers to fight abroad.

“Lawmakers who are practically defence nerds are suddenly flinging these unfamiliar ideas at the public,” Noda fumed in a July interview with Bloomberg News.

Along with Japan’s democracy, the economy is a clear casualty of Abe’s pet projects. Rather than bold deregulation — loosening labour markets, supporting entrepreneurs, slashing trade barriers, or creating an energy renaissance — Abe has served up a few platitudinous tweaks. Efforts to empower women, an issue close to Noda’s heart, are a case in point.

There is no quicker or more obvious fix to Japan’s 20-year malaise than better utilising the half of its 126 million people who are female.

Kathy Matsui of Goldman Sachs, an early champion of “womenomics,” says Japan’s gross domestic product would get a 15% boost if the female employment rate matched that of men (about 80%).

Abe himself has trotted Matsui out to demonstrate his determination to help women “shine.” His choice of word would also aptly describe policies that are meant to draw attention, but have little real substance.

On Aug 28, the parliament passed a law to promote the role of women in the labour force. But it is more data dump than gender revolution. Companies with more than 300 workers must set targets for promoting women and disclose metrics.

There is nothing mandatory: no penalties for ignoring the law, little about companies discriminating against women who get pregnant, and few demands for more flexible schedules or rethinking the notoriously long (and mostly unproductive) hours that Japanese workers endure.

In other words, the grey-haired men writing Japan’s gender laws have not got a clue. “Parliament was and is led by men and by the LDP which is a paradise for men,” Noda says.

The risks from Japan’s low birth rate have been ignored, because men were in power, she argues. “It is hard to change if only men are involved. We need the power of women.”

If the status quo is a paradise for men, it is hell for Japan’s fiscal trajectory. Why is it that Japan is winning tidal waves of short-term “hot money,” but scant foreign direct investment, even with the yen down 32% against the US dollar since late 2012?

Because a crushing debt load (more than twice the size of the economy), negligible birth rate (about 1.4 per woman), and fast-aging population (26% over 65) scare big-picture executives. This government’s focus on national security and hollow talk of raising Japan’s game are not helping.

“If you want children to be born, you need women,” Noda says. “But their voices have not been heard. So no one has dealt with all the issues surrounding children and we are facing this fatal problem.”

Mothers, Noda explains, are disadvantaged at work by a range of factors, including shortages of childcare, gender pay gaps and inflexible working hours, none of which are addressed by Abe’s womenomics programme.

The same goes for role models. When I ask Matsui, or “Lean In” author Sheryl Sandberg what is missing, they lament a lack of trailblazers. Not a single Nikkei 225 company is run by a Japanese woman.

For all his feminist rhetoric, Abe has yet to give women any of the big jobs. If he wants to lean in, he should appoint a female finance minister, foreign minister or head of his cabinet, inspiring Japan’s corporate executives to follow suit.

Noda has sparked her share of national debates, from being one of Japan’s first female powerbrokers, to becoming a mother at 50, to demanding that women should be allowed to keep their maiden names after marriage, to breaking with Abe on his nationalist policies.

Imagine what she could do as prime minister. And imagine if such fresh thinking had a chance to revitalise a nation that is ignoring half its people. — Bloomberg View