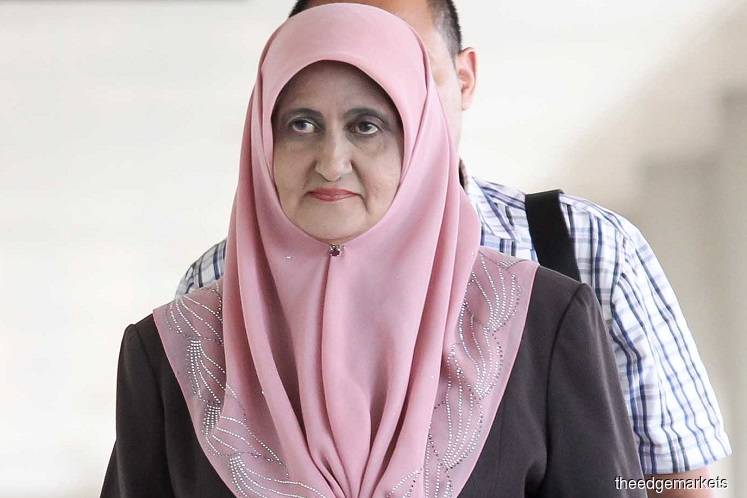 "What made you do the amendment [to the audit report]?" asked Sri Ram.

"After the discussion on the 24th, Tan Sri Ali Hamsa and the group asked us to make several amendments. Each of the amendments had its own explanation and not all was because of national security reasons," said Saadatul Nafisah.

She said the group disagreed with the NAD's report, given that the report included its opinions, which can be agreed or disagreed upon, and that both she and Ambrin were defending what was produced in the report.

She added that the NAD was not obliged to make the changes to the report.

"But you were made to do [the changes]?" asked the senior DPP.

"Yes, we were made to do it and we did so reluctantly," said the witness.

"During the three-hour meeting, based on the impression you gathered, for whose benefit were these amendments suggested for?" asked Sri Ram.

"Tan Sri Ali Hamsa said it was for the good of the nation, as some of the issues are sensitive and may affect the country's economy or the stock market," said Saadatul Nafisah.

Sri Ram then quoted Ali's words from the recording where the latter had said, "We want to take care of our leadership."

"When he said leadership, what do you understand by this?" Sri Ram asked Saadatul Nafisah.

Several portions of the audit report were amended and removed before the final version was tabled, including several mentions of fugitive businessman Low Taek Jho's (Jho Low) involvement in 1MDB, according to the witness.

The final report also excluded a paragraph on the Islamic medium term notes (IMTN), which stated that the suspension of the IMTN was not raised in the cabinet on May 27, 2009, held after Najib's meeting with the then Yang di-Pertuan Agong earlier that day.

Saadatul Nafisah also affirmed that a paragraph relating to an agreement between Country Group Securities Public Co Ltd (CGS) and Acme Time Ltd, which was found to be controlled by Low, was dropped from the report as well.

Bank Negara Malaysia found the secondary subscription agreement signed between AmBank and CGS, as the former sold its stake in the IMTN to the latter, with CGS subsequently entering into a put option agreement with Acme as its joint transaction partner.

However, during the meeting, Ali said the issues relating to AmBank, CGS and Acme were outside the scope of the audit or 1MDB, as they were related to the secondary market and no longer related to the troubled fund, which led to the exclusion of the paragraph.

Najib is charged with abusing his powers under Section 23 of the Malaysian Anti-Corruption Commission (MACC) Act to order the alteration of the audit report to prevent action from being taken against him.

Arul Kanda, who is jointly tried with Najib, faces a charge of abetting the ex-premier.