Wisma Genting up for sale

GAMING, leisure and property group Genting Malaysia Bhd (GMB) is seeking a buyer for its Wisma Genting office building in Kuala Lumpur ahead of its move to a new office in Kampung Attap, sources say.

It is learnt that GMB is proposing a sale and a four-year leaseback of Wisma Genting pending the completion of the new building in Jalan Belfield, in Kampung Attap, also in Kuala Lumpur. At least two sources familiar with the plans have said GMB (fundamental: 2.4; valuation: 1.2) hopes to sell Wisma Genting for RM500 million or RM1,222 psf.

Wisma Genting is the headquarters of the Genting group of companies in Malaysia. The building has an occupancy rate of 95%, with the group taking up 65%. Located in a prime area in the capital — at the corner of Jalan Sultan Ismail and Jalan Raja Chulan — the building is a single block with two wings. The first wing was completed in 1987, and the second, in 1995. The building offers 25 levels of office space and six levels of basement car park and a street level car park, with a total of 514 bays.

The property sits on a 42,410-sq ft freehold parcel and has a built-up of 678,632 sq ft with a net lettable area of 409,084 sq ft. Tenants include financial institutions such as CIMB Bank, Maybank and Uni Financial Reinsurance Service (L) Ltd.

At the time of writing, GMB had not responded to questions from The Edge on whether the asset has been put up for sale.

The Edge understands that a purchaser would potentially earn between RM25 million and RM30 million in rent annually.

Industry players say the property’s location on a prime parcel of land will allow the future owner to upgrade it to obtain higher rent. The new owner could also redevelop the site later.

As it is, several redevelopment projects are underway in the vicinity. Adjacent to Wisma Genting is a parcel of land on which Tan Sri Syed Mokhtar Al Bukhary and Mohamed Ali Rashed Alabbar’s Dubai Emaar Properties plan to build  Tradewinds Square through a company called Tradewinds International Sdn Bhd. Two old buildings — The Crowne Plaza Mutiara and Kompleks Antarabangsa — will make way for this development.

Just metres away from the proposed Tradewinds Square, Hotel Equatorial is demolishing its 18-storey building to build a 52-storey hotel and office block. Across the road from these buildings, Permodalan Nasional Bhd plans to convert the old Bangunan MAS office block into serviced apartments. The building was acquired in 2006 for RM130 million.

It is unclear why GMB is not keeping the building for recurring income or future redevelopment.

Meanwhile, the development of the new corporate office of the Genting group is being undertaken by LGT Sdn Bhd. LGT are the initials of Genting Group founder, the late Tan Sri Lim Goh Tong. 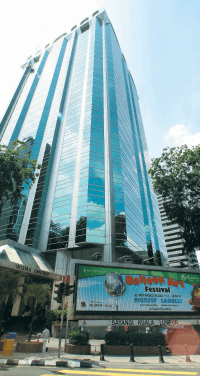 LGT submitted a new application to Kuala Lumpur City Hall last October, revising an earlier plan, but it was rejected the following month. In the new application,  it planned to build two office blocks of 33 storeys and 43 storeys above a podium dubbed “lifestyle hub”, and a third block of 46-storey serviced apartments.