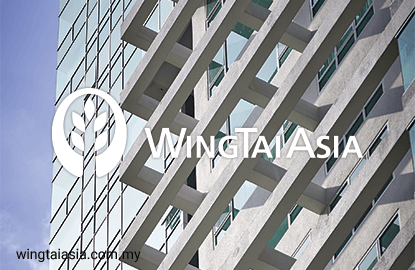 Its latest quarterly revenue has more than halved to RM66.5 million from RM146.6 million, according to its quarterly report to Bursa Malaysia today.

Wing Tai said lower revenue from the property development division was mainly attributable to the sale of Plaza DNP in FY14, and lower revenue recognition for its Verticas Residensi project in the current financial year.

Moreover, profit margins from its retail segment were under pressure from higher import cost due to the weaker ringgit, compounded by weaker consumer spending.

Weaker financials notwithstanding, the group recommended a first and final dividend of 3 sen per share for the financial year ended June 30 (FY15), amounting to RM14.2 million (FY14: 5 sen per share, with a special dividend of 2 sen per share; total RM22 million), subject to shareholders' approval at its upcoming annual general meeting.

“While the retail (division) outlook is expected to be challenging in 2015 with weak ringgit and soft consumer spending, the retail division will continue to streamline its operations to enhance its performance,” Wing Tai said.

“In consideration of the prevailing market conditions and barring any unforeseen circumstances, the group expects to remain profitable for the next financial year,” it added.

In a separate filing, Wing Tai announced it has appointed Christopher Chong Lye Sun, 48, as its new chief financial officer to replace Lee Kong Beng, 64, who has resigned to pursue other interests.

The group said Chong has served as the executive director of internal audit, risk and compliance services function of an international public accounting firm for the past 12 years.