Malaysia
Corporate
In The Edge Singapore this week 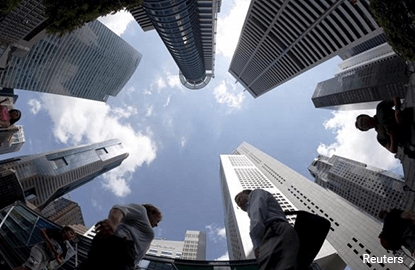 SINGAPORE (March 24): The prospect of interest rate hikes by the Fed used to spark panic among investors. This was due to the widely-held view that a receding tide of liquidity would spark a selloff in Asian assets that had been pumped up by years of ultra-loose monetary policy in developed economies.

Now, it seems that growth is not only recovering in the US but across much of the world. And, higher US interest rates are not likely to be a catalyst for a disorderly rout in Asian markets but a natural complement to accelerating growth and inflation.

One way that investors can ride the pickup in corporate capital spending in Singapore is through the city state’s well-managed stock of commercial property, much of which is held under locally listed real estate investment trusts and on the balance sheets of major property developers.

Indeed, it looks likely that of?ce property rents could bottom this year as demand picks up and new supply tapers off.

For most of the last two years, office rents have been weighed down by surging supply and downsizing by some tenants, notably financial services companies.

Now, some analysts and property market watchers figure the down cycle has reached a trough. And, even though interest rates will probably rise over time, surging rents could make office property REITs and the shares of some developers good investments over the next few years.

“We recommend that investors position themselves in more cyclical sectors, namely the office and industrial REITs, specifically the business parks and hi-tech segments. In addition, with the supply for both sectors easing from next year, we believe the prospects of a recovery in spot rents next year are increasing, which is supportive of our positive stance,” says DBS Research in a March 17 report.

Alan Cheong, senior director of the research and consultancy unit at Savills, sees office rents bottoming out this year.

After several years of very low interest rates and ample liquidity, the valuations of commercial properties have inflated to the point of testing traditional benchmarks.

Against this backdrop, REITs offer a relatively safe means of gaining exposure to rebounding office rents.

Among the office property REITs, CapitaLand Commercial Trust (CCT) is likely to be among the least affected by higher debt costs as interest rates rise, according to Morgan Stanley. It also looks certain of delivering decent DPU growth over the next two years.

Which other REITs and property stocks are poised to bene?t from the cyclical upturn? Are rising interest rates a risk?

Find out more in our cover story, “Trough Times”, on pages 14-16 of The Edge Singapore (week of March 27), available at newsstands now.