Will Serba Dinamik's top execs be let off with just a compound for providing false reports to SC? 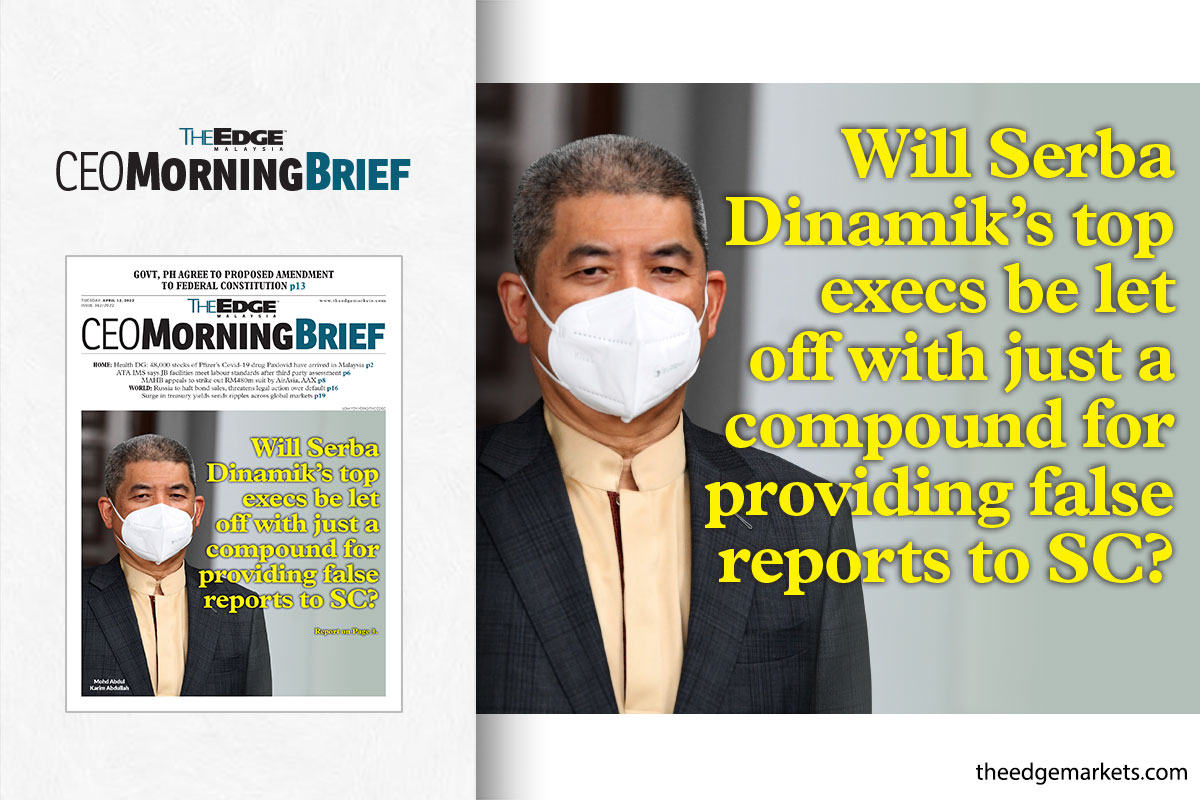 KUALA LUMPUR (April 11): It appears that Serba Dinamik Holdings Bhd's chief executive officer (CEO) Datuk Mohd Abdul Karim Abdullah and three other top executives who have been charged with providing false reports to the Securities Commission Malaysia (SC) last December might be let off with just a compound, instead of being tried in court and possibly face jail time for the offences they were charged with.

This follows reports on Monday that Serba Dinamik had sent letters of representation to the Attorney-General's Chambers (AGC), which, according to proceedings in the Sessions Court, had been “conditionally accepted” by the chambers.

Normally, a representation letter is sent either to reduce a charge or have the charges dropped.

SC's deputy public prosecutor Hashley Tajudin told the Sessions Court that the AGC was "agreeable" to the representation, contingent on certain conditions being fulfilled, but did not elaborate. This took place when the SC was supposed to update the court about handing over the relevant documents to the defence team about the charges the defendants faced.

Meanwhile, over at the Court of Appeal (COA), Serba Dinamik's counsel Mak Lin Kum, who is representing the company in the matter of it being compelled by Bursa Malaysia Securities Sdn Bhd to reveal Ernst & Young Consulting Sdn Bhd's fact-finding update (FFU) from their special independent review, informed the court that his clients' charges at the Sessions Court would be compounded.

“The AG Chambers has agreed and they would issue compounds instead,” the counsel told the COA bench that is led by Justice Datuk Lee Swee Seng.

Regardless of this revelation, Serba Dinamik failed to obtain a stay from the COA on the High Court's order that compelled the company to abide by Bursa's directive to reveal the FFU.

Presently, Serba Dinamik and its senior executives are facing charges at four different Sessions Courts, three of which are in Kuala Lumpur and one in Shah Alam.

On Dec 28, Serba Dinamik itself was charged under Section 369(a)(B) of the Capital Markets and Services Act 2007 (CMSA) involving a false statement relating to the revenue of RM6.014 billion recorded by the group in its consolidated results for the quarter and year ended Dec 31, 2020.

On the same day, the oil and gas giant’s executive director Datuk Syed Nazim Syed Faisal, group chief financial officer Azhan Azmi, and vice president of accounts and finance Muhammad Hafiz Othman were each charged with the same offence under Section 369(a)(B), read together with Section 367(1), of the same Act.

A day later (Dec 29), Mohd Abdul Karim was charged with the same offence, also framed under Section 369(a)(B) of the CMSA, which stipulates that a person who, with the intent to deceive, makes or furnishes any false or misleading statement or report to the commission, a stock exchange, a derivatives exchange or an approved clearing house relating to the affairs of a listed corporation commits an offence.

If found guilty, a person can be jailed for up to 10 years or fined up to RM3 million.

Muhammad Hafiz was also separately charged at the Shah Alam Sessions Court with falsifying the accounting records of the group's subsidiary, Serba Dinamik Sdn Bhd (SDSB). He was alleged to be directly involved in instructing the preparation of false documents relating to the sales of SDSB, an offence under Section 368(1)(b)(i) of the CMSA.

Notably, the High Court had, earlier this year, allowed the SC's appeal to sentence Transmile Group Bhd CEO Gan Boon Aun to two years' jail and to fine him RM2.5 million for a similar offence. Gan was found guilty of furnishing a misleading statement, with intent to deceive, relating to Transmile’s revenue in the company's earnings report for the financial year ended Dec 31, 2006. Gan's charge was, however, framed under the Securities Industries Act 1983.

Gan, meanwhile, is said to have turned fugitive after he submitted an application to overturn his guilty conviction, for which he was initially sentenced to just one day in jail.

theedgemarkets.com has reached out to the AGC for comments on Serba Dinamik possibly being given a compound, and is awaiting its response.

If a compound is indeed going to be offered, why did the AGC change its mind after giving the go-ahead to the SC to file criminal charges last December? What has happened since? The AGC must explain.