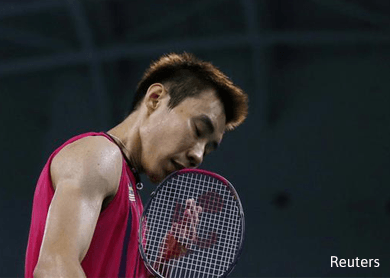 (Apr 29): The banned drug which resulted in Malaysian badminton star Datuk Lee Chong Wei getting an eight-month ban was given to him by the wife of a "very influential  man in Malaysia", the Badminton World Federation's (BWF) three-man anti-doping panel has revealed.

A BWF report said around 2007 or 2008, the unnamed woman began giving Lee some of her own supply of pure Cordyceps capsules, which contained the banned anti-inflammatory drug dexamethasone, which she bought in raw whole form and had it powdered and  capsulated at a store in Kuala Lumpur.

The report said she began to send Lee her Cordyceps capsules on a regular basis as a gift.

"The athlete (Lee) does not wish to identify the lady by name because he fears the consequences for her, if she is associated with his doping case," the 13-page report signed by panel chairman Rune B. Hansen said.

The report, however, said Lee revealed the woman's name in an “in-camera” session of the hearing, in the presence of the three panel members and a Malaysian lawyer.

"In the opinion of the panel, this strengthened his trustworthiness," the report added.

The report said a lawyer, Song Wei Kar, in March last year visited the shop in Kuala Lumpur where the woman had her supply of pure Cordyceps ground and capsulated.

The proprietor confirmed to Song that he had ground and capsulated the pure Cordyceps.

However, he did not want to give a statement for fear that it would adversely affect his business.

The report said the proprietor acknowledged that his treatment of the Cordyceps involved a potential contamination risk.

Lee told the anti-doping panel that he had consumed two Cordyceps capsules every morning in August 2014, including the morning of the semi-finals of the BWF World Championships.

"How the contamination occurred is not known for sure, but most likely it occurred during the process of grinding the raw Cordyceps into powder and putting this powdered Cordyceps into the gelatin capsules in the shop in Kuala Lumpur," the report said.

Laboratory analysis also found the presence of dexamethasone "in and/or on the shell of one of the two capsules" that remained in the container of capsules used by Lee from August 2014, the report stated.

The panel held that the most likely reason for Lee's positive testing for the anti-inflammatory drug was because he had consumed Cordyceps capsules and that the gelatin capsule shells were contaminated.

The report said Lee first began taking Cordyceps supplements in or around 1995 at the age of 13, because his mother believed it was beneficial for his health.

When he moved from Penang to Kuala Lumpur in 2000, his mother used to have the Cordyceps pounded and inserted into gelatin capsules.

Lee and other athletes were also supplied with Cordyceps supplements by the National Sports Institute of Malaysia (ISN) from 2005 to 2008.

Later, when he began taking the capsules given by the unnamed woman, a sports nutritionist at the ISN had told him that they were safe to consume as Cordyceps was a food-based  product.

Announcing the panel's findings on April 27, Youth and Sports Minister Khairy Jamaluddin said Cordyceps capsules containing dexamethasone was the main factor that caused Lee to test positive for the banned substance during the championships last August, resulting in the eight-month suspension.

However, the suspension was backdated to August last year, allowing Lee to return to competitive badminton next month.

The BWF panel conducting the hearing found that Lee had "accidentally" ingested dexamethasone.

It was satisfied that Lee did not set out to cheat, after studying evidence given at the hearing held in the Netherlands on April 11.

"The panel is convinced this is not a case of doping with intent to cheat," it concluded.

Nevertheless, the panel found Lee negligent in accepting and consuming capsules that were "given to him in containers without label or description," the report said.

"Lee Chong Wei has been one of the world's very top athletes for close to 10 years. For an athlete in such a prominent position, the demands of caution to avoid negligence are expected to be very high.

"By accepting the Cordyceps capsules, Mr Lee exposed himself for a completely unnecessary risk of consuming illegal substances for many years, regardless of the source being the Cordyseps itself or the gelatin capsules," the report said.

Lee, 32, had accepted that dexamethasone was present in his sample and that he had consequently committed an anti-doping violation.

The two-time Olympic silver medalist is now able to resume his career and hopes to participate in the Rio de Janeiro Olympics next year. – The Malaysian Insider