Why you should invest in vintage BMW 3.0 Coupe

IT’S not surprising that, according to Hagerty’s classic car valuation, the BMW 3.0 Coupe has appreciated in value by over 40% in the past decade — and by nearly 20% in the past three years alone. What’s surprising is that the car, manufactured from 1971 to 1975, was slow to begin its spectacular ascent.

“These cars were a notoriously great value,” says Carl Nelson, a marque specialist and owner of one of the nation’s leading independent BMW repair and restoration shops, La Jolla Independent. “An incredible car to drive, looks beautiful, performs well, handles well. Does everything you’d ever want. Fifteen years ago, 20 years ago, you could pick up these cars for under US$10,000.”

Those days are long gone. In today’s heady collector car market, an average BMW 3.0 CS or CSi will cost over three times that amount. (The “i” in the latter name indicates the presence of a more potent system for delivering fuel to the engine.) And the ultra-rare, lightweight CSL models, with their alloy body panels and acrylic side windows, can approach US$150,000 (RM543,000).

One look at the car explains its appeal. It has the long hood/short rear deck proportions that define a classic coupe, and it bears elegantly understated detailing such as the chrome trim lining its mid-section and surrounding its windows. All four windows retract, which lends excellent visibility and a convertible-like feeling inside. The model was one of the first times the marque used the now immediately recognisable BMW twin-headlamp and twin-kidney grille face. So lovely was the 3.0 Coupe that when BMW started its famed Art Car programme — commissioning renowned painters to create custom works on their vehicles — the first cars chosen, as templates for works by Frank Stella and Alexander Calder, were 3.0 Coupes.

Meant to rival the dominance of the era’s contemporary Mercedes coupes and sedans, the 3.0 Coupe helped define the Bavarian brand’s unique selling proposition: that it offered a more sporting and engaging form of luxury. To this end, BMW built a powerful and smooth revving straight six-cylinder engine — another hallmark that’s continued to this day — into its forward-canted prow. It was good for a top speed of over 200kph (128mph). Inside, the coupe seated four comfortably, providing such accoutrements as power windows, air conditioning and leather seats.

It is also a very adult vehicle. The 3.0 is not a hot rod or a muscle car but a stately Grand Tourer, meant to be piloted along twisting coastal roads en route to a weekend getaway. It is exhilarating but never dangerously fast — well planted, yet never punishingly firm in its ride. And it makes mechanical sounds that are wonderful, but never intrusive.

So why is it only now getting its just desserts? One factor is the overall super-heated nature of the collector car market, blue-chip segments of which are up 100% to 300% in the past five years. Some reflect a marked escalation in the value of specific German cars made during the same era. “Honestly, what we think is driving a lot of that price escalation right now is the Porsche people,” Nelson says, explaining that some aspiring Porsche fans are simply being priced into the BMW market. “Porsches — especially early 911s — have gone out of sight recently. So those people who were looking at putting money into Porsche now are putting smaller amount into a BMW Coupe.”

As wonderful as these cars are to look at and drive, and as much as they seem a great bet for further escalation in value, they do not come without hazards. Foremost is rust. The contract for the 3.0 Coupe’s handsome body was farmed out to famed German coachbuilder Karman, and many of the unseen seams of the vehicle have a propensity for rot. Our friends at Hagerty once described the 3.0 Coupe’s sensuous curves as, “one of the prettiest ways to creatively trap moisture ever devised”.

Replacement parts can also be difficult to come by or be very expensive. As just one example, rear-turn signal assemblies now run US$1,400 — per side. “Usually, when we’re restoring a car, we tell people buy three Coupes,” Nelson says. “A nice one and two junkers. That way, you just might have enough parts to get most of the way through it.”

Thus, unlike that of such blue-chip vehicles as a Mercedes Benz 300SL Gullwing or an Aston Martin DB5, where adding a six-figure restoration to a six-figure purchase price will yield a six-figure profit, a full-on restoration of a 3.0 Coupe might not be worthwhile from a profitability standpoint. “To make a US$100,000 car, you’re probably going to spend US$150,000. The only person that’s gonna to make money is the restoration shop.” Nelson says. “If you love the car and want to drive the car and really appreciate the car, that’s great. But if you’re trying to turn and burn, you’re probably gonna get burned.” — Bloomberg 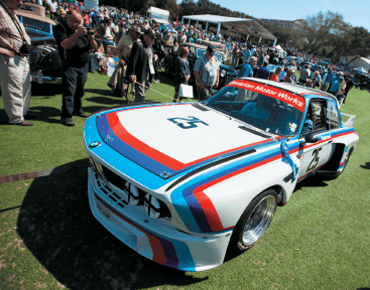