Why PR1MA is struggling to fulfil its 500,000 homes target 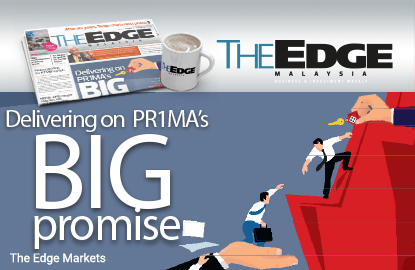 KUALA LUMPUR: The target was 500,000 affordable homes in 5 years for the middle-income group that has been priced out of the property market.

But Perbadanan PR1MA Malaysia, launched in 2011 by Prime Minister Datuk Seri Najib Razak, has learnt the task is an uphill one, with land issues and reluctant private developers the main stumbling blocks in its path.

Add to that, barely two years into the agency's establishment, Tan Sri Jamaluddin Jarjis, former federal minister and Malaysia's envoy to the US, died in a helicopter crash.

The unexpected loss of a strong advocate in the administrative seat of Putrajaya left the majority of the burden on PR1MA CEO Datuk Abdul Mutalib Alias, who was an investment banker with Chase Manhattan Bank for 15 years before joining the public service as a special officer to federal ministers.

As reality set in, the timeline for the 500,000 homes has now been extended, The Edge Malaysia assistant editor Chua Sue-Ann wrote in the weekly's cover story for the week of Feb 27-March 5.

Still, she noted this year is set to be a milestone for the government agency, as it has also rolled out a special end-financing scheme to help fill the funding gap faced by many of its homebuyers, and anticipated to deliver another 8,500 homes by year-end, bringing the completed homes tally to 17,000 in two years. Though that is still a long way from its mandate of 500,000 homes.

PR1MA’s engines really only started two years after its launch, after its board was appointed in March 2013. To date, PR1MA has secured board approval for 260,188 units, of which 132,352 were under construction as at January. The first batch of PR1MA homeowners got their keys last year.

In a frank conversation with the weekly, Mutalib details the issues PR1MA faced, and revealed how the agency has grown, from its minimal staffing of a team of 20 in a small windowless office meant for seven -- to just about 300 now.

He conceded that PR1MA got off to a slow start because of the many challenges it faced. It should also be noted that most of its earlier projects were  high-rises, which take about three years to complete, a longer time than for landed homes.

But the key and toughest challenge for PR1MA has been a lack of land bank to work with. To deliver 500,000 homes, PR1MA estimates it would need about 12,500 acres based on a plot ratio assumption of 40 units per acre. But its negotiations with government agencies and stakeholders to source for these lands were not a big success.

“We did not get the land that we identified because most of it was earmarked for other developments. I can understand why they didn’t want to release the land — simply because they had earmarked the land for their own purpose, so we had to respect that,” Mutalib told the weekly.

PR1MA ended up getting only about 108 acres, of which just 39 acres were suitable for development. In response, the agency changed its strategy and strive to work with private developers. Unfortunately, the response has been lukewarm at best.

“It’s hard to tell developers you must work with PR1MA. Providing aff ordable housing is the government’s job. Some saw PR1MA as competing with private developers in a market that was already getting crowded,” said a property sector observer who has tracked PR1MA’s journey.

PR1MA has also been criticised for failing to address the key structural issues plaguing Malaysia’s unaff ordable housing crisis and for being a “stop-gap” measure to placate the masses.

But PR1MA’s officials argue that their mandate was never to help put a roof over the heads of the low-income group. That segment, they say, is taken care of by existing public housing projects, including Projek Perumahan Rakyat and other state government-led initiatives.

PR1MA’s mandate, from its point of view, is clear. It is to help the middle-income group access affordable housing that is on a par with products available on the market but at a lower price, hardly the same thing as low-cost properties.

To find out more about how PR1MA is planning to fulfil that mandate, and how it intends to eventually stand on its own to continue to do so -- independent of the federal government's funding -- pick up a copy of The Edge Malaysia today. Check out also why 'Non-subsidised PR1MA homes also means tough delivery of rent-to-own'.

P/S: The Edge Malaysia can also be downloaded from Apple's AppStore and Androids' Google Play.