Why German efficiency matters to Malaysia

TOPICS such as carbon emissions and climate change have become the central focus of power generation in recent years, leading to strong emphasis on renewable energy sources.

However, the role of conventional fossil fuel technologies such as gas has not diminished. In fact, Germany-based Siemens AG is at the forefront of the field, holding the world record in the design and construction of the most efficient combined cycle gas turbine (CCGT) plants in operation. Currently, the most efficient plant in operation is the verified 60.75% efficiency CCGT in Irshing, Germany.

“Back in 1991, our combined cycle technology was capable of 52% efficiency. In 1996, we improved it to 56%, which was a world record at the time. By 2001, we had improved this to 58%, maintaining our  record for the most efficient machine and now we have achieved 60.75% efficiency, which is the highest ever attained,” explains Dr Olaf Koenig, co-ordinator of strategic projects for Siemens’ gas turbine manufacturing plant in Berlin.

This is thanks in part to Siemens’ latest gas turbine, SGT5-8000H, which has an efficiency of over 40% in open cycle operation. But more importantly, Siemens has proved the SGT5-8000H’s reliability with it clocking over 100,000 equivalent operating hours (EOH) last month without incident.

By next year, as more turbines come on line, EOH is expected to exceed 250,000. A pair of these turbines is due to begin commercial operations by 2016 at Tenaga Nasional Bhd’s 1,071mw CCGT plant in Prai, making it one of the most efficient in Southeast Asia.

Another four turbines will be making their way to Pengerang, where they will be installed at Petroliam Nasional Bhd’s (Petronas) co-generation plant that will supply steam and power to the Refinery and Petrochemical Integrated Development project in Johor.

From a cost perspective, 100,000 EOH is an important benchmark because it allows the machines to be fully insured and lowers insurance costs for project developers.

Malaysia needs to be able to rely on its new power plants, especially after 2016 when Tenaga anticipates a capacity crunch and every megawatt of power will count. Efficiency will be paramount as the government plans to wean the power sector off cheap subsidised natural gas that is being supplied by Petronas at RM13.70 per mmBtu (million British thermal units). In comparison, natural gas prices in the region are between RM40 and RM45 per mmBtu.

The national oil company is only committed to supply a fixed quota of natural gas to Tenaga at RM13.70 per mmBtu, which is not adequate for the country’s current power demand. Hence, Tenaga is already importing additional gas requirements in the form of liquefied natural gas.

As the gas subsidy is slowly reduced, the country’s energy needs continue to grow and as more gas plants are built, the gas bill will only keep rising. Hence, there is growing pressure on Tenaga to ensure its plants are as efficient as possible.

For a plant that is the size of the one in Prai, the estimated savings are 1.33 million mmBtu of natural gas each year. At RM13.70 per mmBtu, that is savings of RM18.22 million per annum. However, if gas prices increase to RM40 per mmBtu, the savings could be as much as RM53.2 million each year for every 1.5% difference in efficiency. That is over RM1.3 billion for a 25-year concession.

Natural gas accounts for 40% of the nation’s fuel input for power, consuming 11,533 thousand tonnes of oil equivalent (ktoe) based on 2012 statistics by the energy commission. At the same time, gas makes up 46% of total energy generated — 60,993GWh.

The engineering to exceed 60% efficiency

Achieving more than 60% efficiency is no mean task and Siemens is the first equipment manufacturer to boast such a feat in an operating plant at present.

Today, 60% efficiency has become a new industry benchmark, but by 2016, Siemens aims to top that feat with a 61% efficiency at the 595MW CCGT plant in Lausward, Germany, that is currently under construction. Including district heating, the plant is capable of extracting up to 85% of energy from the fuel by supplying hot steam to the surrounding suburbs for heating during the colder months.

For the man in the street to understand why that feat is impressive, simply consider the average internal combustion engine used in vehicles that are only able to extract about 20% of energy from the petrol burnt. That means almost 80% of the energy is lost through heat, friction and sound. High-end engines may have higher efficiency, but even they are limited to a maximum of 37% efficiency due to thermodynamic limitations.

A CCGT is able to overcome this limitation by attaching a steam turbine to the gas turbine and extracting energy from the hot exhaust gases. Naturally, a highly efficient gas turbine is still needed and the larger and hotter it runs, the more efficient it becomes. Gas turbines work very much like jet engines on an aeroplane. Compressed air and natural gas are ignited at high temperatures to drive the turbine that is connected to the generator.

To exceed 60% efficiency, incredible precision and innovation need to be put into designing, building and installing such machines.

For some perspective of the engineering involved, the temperature at the blades closest to the point of combustion is around 1,516°C, close to the melting point of iron. Specialised ceramic, similar to that used by space shuttles for re-entry into earth’s orbit, is used to coat and protect the blades. On top of that, tiny air holes are inserted along each blade to cool it down, explains Koenig.

On top of that, the machine must operate at 50Hz, which is the standard frequency that most power grids utilise. This means that the shaft of the gas turbine spins at 3,000 revolutions per minute. While this does not seem particularly fast, the tips of the blades with the widest diameter in the turbine are moving faster than the speed of sound, explains Koenig.

Now, imagine that amount of force being contained in a casing that has roughly a millimetre’s clearing from the tips of the blades to increase efficiency.

The gas turbine, generator and steam turbine are also assembled on a single shaft that is over 50m long. Hence, the three components, each weighing several hundred tonnes, need to be lined up perfectly to ensure the entire length of the shaft is dead straight. Such minute adjustments involve jockeying a 450-tonne gas turbine by fractions of a millimetre on specialised hydraulic jacks.

All turbine manufacturers have access to the same materials technology, notes Koenig, but it is the small details in design and impeccable precision that have allowed Siemens to defend its title of producing the world’s most efficient machines. 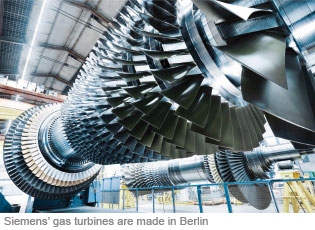