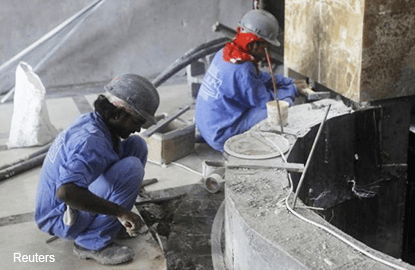 CALLS are getting louder for the oil-rich Gulf states to take in more Syrian refugees. In the Arab world itself, the opinion that they are not doing enough is widespread.

Those countries, however, may not really be suitable destinations for the asylum seekers — precisely because of their often deceptive cultural closeness to most of the Syrians fleeing the conflict.

The widely held opinion that Saudi Arabia, the biggest of the Gulf nations, has not taken in a single refugee may well be incorrect.

Nabil Othman, acting regional representative to the Gulf region at the United Nations’ refugee agency (UNHCR), told Bloomberg there were 500,000 Syrians in that country.

Saudi Arabia, like all of the Gulf states, is not a signatory to the UN refugee convention, so these displaced people are not officially designated as refugees.

One could still argue, however, that even Othman’s figure isn’t enough relative to the Saudi population of almost 31 million, especially given its role in funding and arming one side in the conflict.

Lebanon has accepted 1.3 million refugees — more than a quarter of its population.

There are reasons, however, why Saudi Arabia doesn’t let in more people and why the United Arab Emirates (UAE) prefer to pay to equip and maintain refugee camps in other countries, close to Syrian borders.

An overwhelming majority of the displaced Syrians are Sunni Muslims. Of the paltry 1,519 Syrians the US has taken in since 2011, 1,415 were Sunnis. The Saudi population is also predominantly Sunni.

There is a catch, however: Many Sunni areas of Syria have served as a base for the Islamic State, which the Saudi and UAE air forces are helping to bomb.

Islamic State is hostile to the Saudi regime, and it is important to them whether the refugees are fleeing Islamic State or the bombings.

Sectarian difficulties have already surfaced in Muslim countries that have been open to displaced Syrians, upsetting often fragile ethnic and religious balances.

In Turkey, Syrians initially settled in the province of Hatay, which has a sizable Arab Alawite minority. The local Alawites were not welcoming and the Turkish government made an effort to resettle the refugees.

Elsewhere, it became clear that local Christian minorities were scared of the newcomers, too. Kurdish refugees, though Sunni like most Turks, were best directed to areas with bigger Kurdish populations.

In general, the longer the refugees stayed, the more the locals resented them and perceived them as a threat.

In Lebanon, where the Sunni-Shi’ite balance is especially fine, the authorities are afraid of further tipping it in favour of Sunnis, given the tendency of the Shi’ite Hezbollah militias to react violently to any provocation.

There are now visa restrictions in place for new arrivals and renewing residency has been made more difficult for those already in Lebanon.

In Egypt, which initially welcomed Syrians, the regime of president Abdel Fattah el-Sisi suspects the refugees of having links to the Muslim Brotherhood, which Sisi has vowed to eradicate, so entry has become more difficult and there have been deportations.

In the Gulf states, potential problems are complicated by the already large expatriate populations: In some of them, locals are outnumbered by workers from neighbouring Arab states, India and Southeast Asia.

To these countries, letting in more foreigners does not just mean sharing the (shrinking) oil wealth, but increasing the potential for political, ethnic and sectarian tension.

The fine distinctions of politics and faith, which are often invisible to Westerners, matter in the Middle East. They produce wars that are as devastating as they are difficult for outsiders to comprehend.

In Europe, many opponents of immigration say Muslims should be kept out because they bring their wars and feuds with them.

But even several million immigrants distributed across the European Union would account for less than 1% of the general population, and very few locals would take part in such imported conflicts.

Jihadists posing as migrants might, of course, conduct terrorist attacks, but that risk exists without refugees. Besides, the political and humanitarian practices in Western societies, as well as a more even distribution of wealth, have a calming effect.

Research has shown that first-generation immigrants in the US commit fewer crimes than locals.

It would be nice if the Gulf states were to open their doors wider to Syria’s refugees.

Yet Europeans and Americans should not try to shift attention to the petro-states’ perceived indifference, so that they can do less themselves.

The West is much better equipped for the task of handling this human fallout from the catastrophe underway in the Middle East, and Europe needs the people who are coming in. — Bloomberg View

This does not necessarily reflect the opinion of the editorial board or Bloomberg LP and its owners.