Who’s next in the consolidation game?

ANOTHER merger deal involving mid-cap developers is on.

The mergers have prompted many to wonder which developers could be the next candidates for similar exercises.

Common shareholding is probably one factor that will pave the way for a merger exercise.

A quick check on the shareholding structures of property and property-related companies shows that there are at least 18 firms that are owned by eight tycoons or major shareholders, which could be or have already become potential merger and acquisition targets (see table).

Construction and property tycoon Tan Sri Lim Kang Hoo is the common shareholder in Iskandar Waterfront City Bhd (IWC), Ekovest Bhd and Knusford Bhd. However, a tripartite merger is unlikely, given that the three companies have different groups of substantial shareholders.

Recently, the build-up of interest by Ecofirst Consolidated Bhd CEO Datuk Tiong Kwing Hee in Meda Inc Bhd could fuel speculation of a potential merger between the two, which also share another common substantial shareholder in Datuk Dr Teoh Seng Foo and his brothers. The Teoh brothers own 25.8% of Meda and 22.8% of Ecofirst.

It is also worth noting that low-profile tycoon Tan Sri Robert Tan Hua Choon has 8.64% interest in Keladi Maju Bhd, 74.35% in Goh Ban Huat Bhd (GBH) and 25.35% in FCW Holdings Bhd, a contract manufacturing company that is diversifying into property development.

FCW (fundamental: 1.35; valuation: 1.8) plans to launch its maiden property project next year. The company and IJM Land Bhd will jointly develop a 16-acre site in Jalan Segambut, Kuala Lumpur, with an estimated gross development value of RM1.3 billion. The Jalan Segambut land was acquired from GBH (fundamental: 2.05; valuation: 0.6) in 2007 for RM86 million cash.

A senior executive of a listed property firm says the merger between Plenitude and Nomad is a good move,  especially during the current slowdown, as Nomad’s assets will generate recurring income for Plenitude. 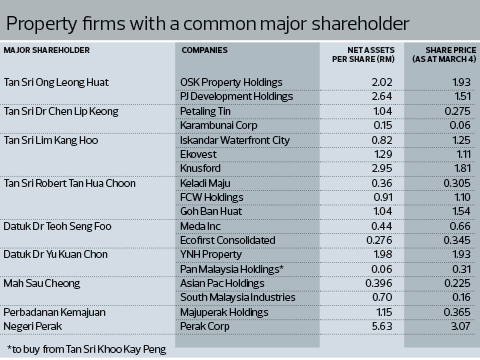