‘What’s so difficult about running a highway?’ 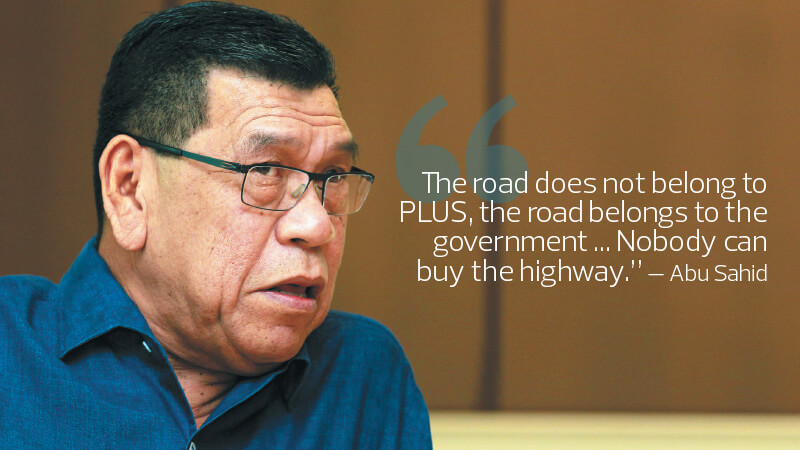 TAN Sri Abu Sahid Mohamed is in high spirits at our interview but he also seems irritated by the comments of certain quarters on his proposed takeover of PLUS Malaysia Bhd — a company with just RM39 million in assets and a concession to operate a highway and collect toll for a stipulated period — from UEM Group Bhd and the Employees Provident Fund (EPF).

Here is an excerpt from the interview.

The Edge: Tan Sri, have UEM and EPF replied to your letter of intent?

Tan Sri Abu Sahid Mohamed: No, they called Evercore (Group LLC) because we asked Evercore to send (the letter) on our behalf. The letter says everything. They (Evercore) are big and they say that the money is there, and that UEM and EPF can treat it as cash.

Tan Sri, it has been said that you have never disclosed your financial backer. Is there a reason for it?

Ask those who got the letter (from Evercore) to come out and say we don’t have the money.

So, Evercore vouches for the funding?

But even ministers have come out to say ...

Do you think the suggestion that EPF needs to be invested in PLUS is valid?

If EPF says that keeping PLUS is good, ask them to assure every one of us that we will receive the dividends, the same amount 20 years from now. Today they can [pay dividends] as they have not paid the principal [loan], when they start paying the principal … The issued bond is only RM19 billion, the balance of the bond is a bullet payment. If you do not save money, how are you going to pay the bullet payment?

PLUS has started paying dividends …

They have taken RM3.6 billion out [of PLUS]. They know that in 20 years, they [the current top brass of EPF] won’t be there.

EPF gets paid dividends on its investment …

Yes, but 6% or 7% of their total investment. If they want to make that money, they will make more money if we buy PLUS from them.

So, you are saying that the money used to pay dividends is actually for the settling of debts?

They invested RM3.4 billion in the company. Collectively in five years, they have taken RM3.6 billion [in dividends], so they already made RM200 million. But in 2020, they have to start paying the principal.

Their principal payment is about RM30 billion. You ask them to work it out and the balance RM11 billion in bullet payment towards the end.

Tan Sri, you have implied several times that PLUS is not well run. Could you elaborate?

They are definitely paying much higher prices. We know what their materials are, we know what contracts are theirs.

It [the contract] goes down eight layers, seven layers … minimum four layers … because of that, their price is high.

Tan Sri, do you have any figures?

Is this one of the reasons you say you don’t have to increase toll rates?

Yes, I could do it better, far better.

Many people don’t understand; they say the asset will go to a foreigner but listen, I am not buying the asset. I am buying a company called PLUS Malaysia Bhd, the company only has RM39 million worth of assets, maybe a Mercedes for the CEO, the chairman, bicycles for the supervisors, helicopters … these are worth RM39 million … the road does not belong to PLUS, the road belongs to the government … Nobody can buy the highway.

PLUS does not have a title for the highway. If you own the highway, you will have title for it. PLUS has a concession to run the highway, the right to collect toll and to maintain the road … And the maintenance is regulated by the highway authority.

Tan Sri, some say you are biting off more than you can chew.

What is too big?

You mean to say this company of RM39 million is big? You are humiliating me …

The operation is big.

You mean to say when I take over PLUS, I will sack everybody?

I am comparing it with MEX …

What’s so difficult about running a highway? The bigger it is, the easier because of economies of scale. We have the experience, we have 40 years in business … it’s not that difficult. Don’t think PLUS is so big that we cannot run it …

Are there other parties that are interested in PLUS?

Prove to me one, those can match my offer can take it.

Tan Sri, a sensitive question. The perception is that you are Tun Mahathir’s man …

This has nothing to do with Tun Mahathir. I’m a businessman.

Is there a time frame for your offer?

There is no validity period?

Tan Sri, what will be your next course of action if they remain silent?

We haven’t thought about it yet but we are still waiting. The letter is still open.

Tan Sri, you mentioned that it is for the government to sell PLUS, not for them — UEM or Khazanah — to decide.

Yes, even if they decide or agree to sell, they need to get the government’s approval. Are you aware of that? There is a clause in all the concessions.

Could it work the other way? The government could instruct them to sell.

Tan Sri, this is also sensitive. People keep bringing up your credibility …

Of course, they do. It’s the same every time. What kind of credibility are you looking at?

What about Perwaja? I still own Perwaja shares. I didn’t sell any share, I didn’t drive it to the ground, I gave my word that I would not sell and I have not. The government asked me to give it to a strategic partner. I promised the government I would not sell and I didn’t. I burnt RM700 million … what credibility are you talking about? I burnt RM700 million to keep my word.

Tan Sri, the fact that banks are reluctant to lend you money, doesn’t that paint a negative picture of you?

I go to international banks.

Malaysian banks are not willing to lend you money. Does that impact your credibility?

They don’t want to lend me money because they don’t know me, they don’t know my business or they do not like me for whatever reason. All along, they say I am a dubious character … why a dubious character, because I can do things without borrowing money … Because I have good friends who give me credit on my materials and I honour my word. I pay them after I complete a job. I have property I built up over the years. I built up my business overseas, I bring back my money, they don’t know where I get my money from … I used to be scrap dealer. I dealt in scrap all over the world … if they don’t want to lend me money, what can I do? If the terms are not right … what can I do?

When they say banks don’t lend me money, it’s not totally true. There are facilities given by local banks for the TBS (Terminal Bersepadu Selatan) and MEX ... People are often jealous.