What were removed from the 1MDB audit report The prosecution in the trial informed the High Court that the additions are the portions originally missing in the 1MDB audit report produced by the AG that was submitted to the PAC. Photo by Patrick Goh 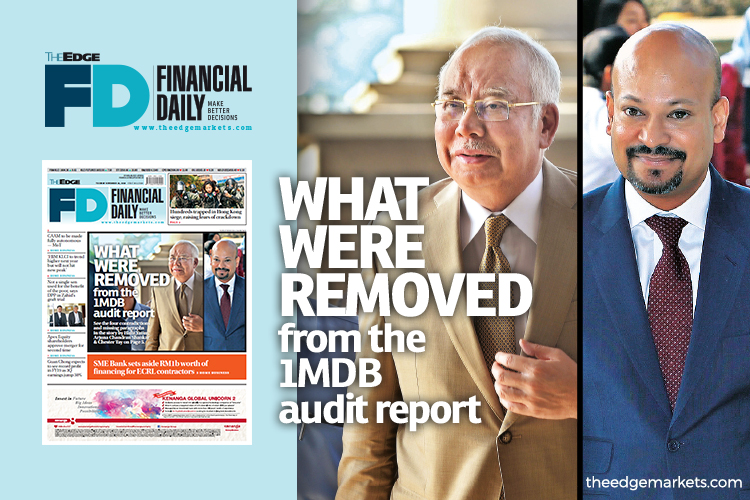 The prosecution in the trial, led by Senior Deputy Public Prosecutor Datuk Seri Gopal Sri Ram, informed the court that the additions are the portions originally missing in the 1MDB audit report produced by the auditor-general (AG) that was submitted to the Public Accounts Committee (PAC).

“There were passages in that report that caused concern to Najib though they were true in fact ... He took positive steps to have those passages altered or removed ... Despite the report was ready to be placed before the PAC in Parliament, a meeting was convened on Feb 24, 2016 at Najib’s behest ... As a result of what transpired at that meeting, the relevant passages were amended or removed,” said Sri Ram in his opening statement yesterday.

Below are the four material contradictions or missing paragraphs as stipulated in the charge sheet.

The AG noted Najib had an audience with Sultan Mizan Zainal Abidin, the Sultan of Terengganu and the then Yang di Pertuan Agong, on May 27, 2009 where Najib agreed to postpone the RM5 billion Islamic medium-term note (IMTN) programme for further evaluation by the Special Monitory Committee.

However, the postponement was not relayed to the cabinet although the ministers had met on the same day, resulting in the IMTN being issued.

Terengganu Menteri Besar Inc — the original owner of Terengganu Investment Authority (TIA), the precursor of 1MDB — then gave  a stern warning to the notes’ arranger AmBank on May 29, 2009 following the incident.

The Terengganu Sultan (the Yang di-Pertuan Agong then) had asked for a report on the unauthorised issuance of the IMTN.

Najib’s involvement in the IMTN was not mentioned at all. Instead, it said the decision of TIA’s then CEO Datuk Shahrol Azral Ibrahim Halmi to go ahead with issuing the notes caused him to lose his directorship of the fund. However, Shahrol was then reappointed on the same date through a TIA’s directors resolution.

It was stated that 1MDB’s CEO told a board meeting dated Oct 10, 2009 that the IMTN issuance had to be accelerated, as demanded by TIA’s special adviser, to jointly develop Pulau Bidong with Mubadala Investment Company.

It should be noted that during the 1MDB-Tanore trial, Najib’s former special officer Datuk Amhari Efendi Nazaruddin had testified that Low Taek Jho (Jho Low) was TIA’s special adviser to the ex-PM in his capacity as chairman of the TIA advisory panel.

The AG then detailed the RM3.8 billion IMTN, priced at RM88.158 for every RM100 nominal, being arranged by AmBank and on May 18, 2009 subscribed by Thailand’s Country Group Securities PCL (CGS), which on the same day signed a put option agreement with Acme Time Ltd as a joint-transaction partner. CGS instructed Ambank to place out the entire RM3.8 billion IMTN three days later on May 21, 2009.

Information about pressure from TIA’s special adviser was removed, and detailed arrangements with CGS and Acme Time were taken out. Instead, the report merely stated the IMTN was a “bought deal” where AmBank, as lead arranger and primary subscriber, had obtained secondary market subscription for the issuance of this debt paper.

The AG pointed out that during a PAC meeting dated Dec 18, 2015, a committee member questioned the existence of two versions of 1MDB’s financial statements for the year ended March 31, 2014 — the one submitted to the Companies Commission of Malaysia (SSM) and another one for the financial institutions which loaned money to the 1MDB group.

The AG then listed three discrepancies between the two versions, two of them related to the following:

Disclosure of US$1.22 billion (RM4.03 billion) worth of redemptions received by Brazen Sky Ltd, and the addition of a sentence stating 1MDB had agreed to form a joint venture with Tenaga Nasional Bhd and a “US-based company” to undertake photovoltaic projects in Malaysia.

The AG also disclosed 1MDB’s response to queries on two versions of its financial statements.

“According to 1MDB management’s response dated Dec 9, 2015, there was only one financial statement for the year ended March 31, 2014, audited and issued by the company. In view of the significant differences in the two financial statements, it is advisable for the responsible authorities to make further investigation into the matter,” the AG said.

All this were removed from the document.

The AG said in 1MDB’s financial statement ended March 31, 2014, 1MDB told the SSM that US$1.22 billion from the redemption of investments in 1MDB PetroSaudi Ltd (a 1MDB joint-venture company with PetroSaudi International Ltd) had been “substantially utilised” for debt interest payment, working capital and payments to Aabar as refundable deposits pursuant to a settlement agreement to extinguish the options agreement.

However, 1MDB, in its financial statement to MoF Inc and other financial institutions, stated the same amount  was “substantially set aside” for the same purposes.

Another portion removed was Jho Low’s attendance at a 1MDB special board meeting dated Sept 26, 2009 where they approved 1MDB’s transfer of US$1 billion to 1MDB PetroSaudi Ltd, where subsequently US$700 million was siphoned to Good Star Ltd, a unit linked to Jho Low.

The AG also said its interview with former 1MDB chairman Tan Sri Mohd Bakke Salleh on June 19, 2015 confirmed that Jho Low attended the meeting, and was presented with a copy of the minutes that recorded Jho Low’s attendance.