What if 2008 crisis comes around again? 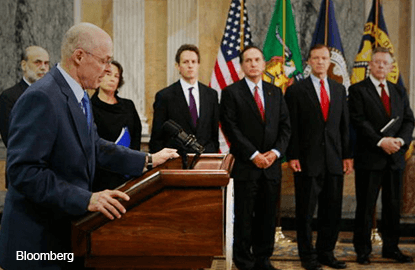 BY the end of last week, stocks, currencies and commodity prices weren’t crashing any longer but financial markets were far from settled. Over the past 10 days, markets have plummeted, paused, recovered and fallen again. There’s little sign the anxiety is lifting.

Until recently investors had been preoccupied with the weakness of the post-2008 recovery. Now some are asking whether 2008 might come round again. It’s an especially disturbing possibility because, on the face of it, the policy options for responding to another slump are fewer than last time.

Governments have run big budget deficits to support demand, so there’s less so-called fiscal space for a new round of stimulus, or so the thinking goes. Interest rates are still at zero, and even the advocates of quantitative easing recognise that it ran into diminishing returns. What’s left?

Policymakers — in the US and Europe anyway — probably won’t have to answer that question any time soon. From time to time, financial markets are volatile; it’s what they do. A spell of turbulence shouldn’t provoke panic. The admittedly tepid expansion will most likely continue.

Yet just suppose. The weaknesses that collapsed the global economy in 2008 were easier to see in hindsight than in real time. Doubtless the same will be true again.

If you stress-test the optimistic scenario, what do you find? What if the mood of financial alarm persists and worsens; there’s a renewed flight to safety in financial markets; investment spending weakens even more and consumer spending follows it down; and unsuspected weaknesses in the financial system announce themselves. What then?

The obstacles to effective remedies would be formidable — but more political, in fact, than economic.

The US and the euro area could safely use fiscal stimulus again if they chose to.

Under the conditions of our thought-experiment, fiscal stimulus might even be debt-reducing, because it would support growth, and if the economy grows faster than the public debt, the ratio of debt to output falls.

Whether the political climate would allow the fiscal remedy to be used is much more doubtful. In the US, and even more in Europe, which is under the sway of Germany’s pathological fiscal conservatism, the resistance to fiscal stimulus would be strong. Governments might choose not to do it, even though they could and should.

This goes double for another powerful remedy — one so politically toxic that it wasn’t used even in response to the crash of 2008. It goes by various names: helicopter money, overt monetary financing, quantitative easing for the people (though bear in mind that Jeremy Corbyn, who may be the next leader of Britain’s Labour Party, and who has popularised that last term, means something different by it).

The idea goes back to Milton Friedman, if not before. The central bank can always — repeat, always — add to demand in the economy by directly creating purchasing power. Friedman said it could drop cash from helicopters. More prosaically, it could mail checks to taxpayers.

Equivalently, the government could cut taxes or build some bridges and cover the cost with bonds placed with the central bank. Each of these interventions, in effect, marries fiscal policy — meaning direct command over economic resources — to monetary policy.

There’s no question that helicopter money would stimulate demand. Wouldn’t it also cause inflation, you ask? Indeed it would: That’s the idea. The more worried people were that the policy was about to cause higher inflation, the more they’d be inclined to spend rather than save, and the more effective the policy would be.

When deflation is the problem, the prospect of inflation is the cure. Helicopter money would be a potent remedy for the sickness in question.

However, the prohibition against this kind of monetary-and-fiscal stimulus is close to total. Quantitative easing in the US, Japan and Europe pushed the envelope of permissible monetary stimulus, it’s true, but not to the point where the semi-sacred principle of central-bank independence was challenged.

In the euro area, that principle is enshrined in law. In the US, it takes the form of a taboo: Leave the Fed alone to do its job. Helicopter money confronts that principle head-on, because it dissolves the symbolic barrier between the central bank and the finance ministry, and makes the central bank a co-designer of fiscal policy, if not the outright servant of the Treasury.

There’s a lot to be said for central-bank independence, to be sure. In ordinary times, shielding monetary policy from the demands of politicians who are apt to take chances with inflation makes sense.

Right now, that concern looks more than a little anachronistic. The question is whether those ordinary times are ever coming back. As long as lack of inflation is the biggest problem, helicopter money belongs on the list of available remedies. — Bloomberg View

This article first appeared in digitaledge Daily, on September 1, 2015.