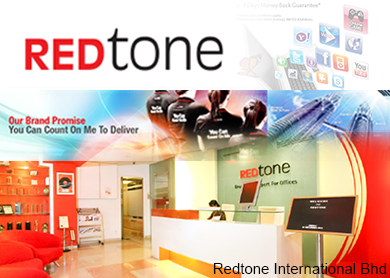 “REDtone has given notice on its intention to undertake a major corporate exercise involving REDtone and it intends to release the material announcement on the said exercise by Mar 27, 2015,” REDtone said in today’s Bursa Malaysia filing.

Industry observers think there could be a possibility of a takeover, given that the Sultan of Johor and Tan Sri Vincent Tan both hold a substantial chunk of equity in REDtone (fundamental: 2.3; valuation: 0.3).

Two separate off market transactions today add to the speculation.

No details are available on Bursa Malaysia about the transactions yet but REDtone’s substantial shareholder Berjaya Corp Bhd (BCorp) could have raised its interest in the group.

The block could have potentially been sold by Syed Ali's Tema Juara, which incidentally held the same amount as at March 16.

In an email reply to The Edge Financial Daily earlier today, REDtone group chief executive officer Lau Bik Soon did not comment on possible corporate exercises, but said the emergence of the Sultan of Johor was a case of good timing.

“Our three key business pillars — telecommunications services, managed telecommunications network services and managed value — added services — are on a strong growth track. Backed by our core competencies, we are optimistic of maintaining the profit trend that we have been seeing over the last three consecutive years since FY12,” he said.

In another email reply, BCorp, the group’s other major shareholder, declined to comment on whether they had a corporate exercise planned for REDtone.

In an note last week, Kenanga Research analyst Cheow Ming Liang said the emergence of the Sultan would further enhance REDtone’s profile and edge in project bidding moving forward, especially from companies controlled by the Johor state’s government and/or other government related projects.

To recap, on Mar 16, REDtone announced Sultan Ibrahim of Johor had emerged as the single largest shareholder in the group, with a direct 20.13% stake, following conversion of his warrants and irredeemable convertible unsecured loan stocks (ICULS) to ordinary shares, and the purchase of shares from the market.

Sultan Ibrahim had acquired 74.6 million shares in the company via a married deal. Prior to the warrants and ICULS conversion, he held a 4.8% stake in RIB.

The 74.6 million shares had been disposed by the group’s chairman Datuk Seri Syed Ali’s vehicle Tema Juara Sdn Bhd. Syed Ali is now left with another 10.53% indirect interest in REDtone.

The next day, BCorp increased its stake to 28.29%, after its wholly-owned subsidiary Juara Sejati Sdn Bhd (JSBB) bought six million shares in REDtone on Mar 12, 2015.

Correspondingly, Tan now has an increased 29.95% equity interest in REDtone by virtue of his interest in BCorp.