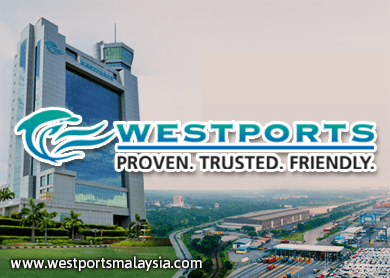 KUALA LUMPUR (May 5): Westports Holdings Bhd shed as much as 6% among top decliners on profit taking after analysts downgraded the stock.

At 2.57pm, Wesports changed hands at RM4.29 to become the eighth-largest decliner across the exchange. The stock saw trades of some four million shares.

Year-to-date, Westports shares have seen a 28% growth, outperforming the KLCI which grew 3%.

Investors took profit in Westports shares after the stock closed higher at RM4.50 last Thursday when the company reported that net profit rose to RM120.19 million in the first quarter ended March 31 2015 (1QFY15) from a year earlier.

Today, analysts said they had downgraded Westports shares due to the stock’s gain.

In a note today, AllianceDBS Research Sdn Bhd said it downgraded Westports shares to "hold" from "buy" due to limited upside as the share price had risen 29% since AllianceDBS initiated coverage on the stock.

However, AllianceDBS raised its target price for Westports to RM4.25 from RM3.85 following an earnings upgrade.