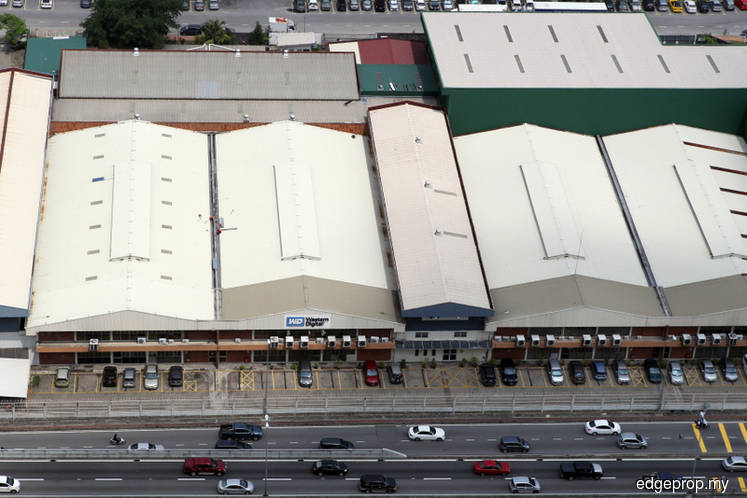 PETALING JAYA (July 18): Western Digital is planning to sell its hard disk drive (HDD) manufacturing facility site at the Sungei Way Free Trade Industrial Zone, Petaling Jaya, where the company has been operating for over two decades, it is learnt.

EdgeProp.my also gathered that Western Digital is looking at a price range of between RM160 million and RM190 million for the 11-acre site, which offers slightly over 1 million sq ft of built-up area.

A back-on-the-envelope calculation reveals that the company is asking for approximately RM334 to RM397 psf, which is relatively higher than the 4.84-acre of land acquired by Sunway Bhd in the first quarter of 2016.

According to a Bursa Malaysia filing, Sunway paid RM35.82 million or RM169.95 psf to Tamura Electronics (M) Sdn Bhd to acquire the freehold land with an industrial factory and warehouse erected on it in Sungei Way Free Industrial Zone at that time.

“The [land] is situated in the Sungei Way Free [Trade] Industrial Zone, strategically located within the prime area of Petaling Jaya, Sunway Resort City and Subang Jaya, which are affluent and mature neighborhoods,” it said.

Before the acquisition of this 4.84-acre of land, Sunway bought over five parcels of land totaling 17 acres, which are situated next to the Western Digital factory site for a combined RM286 million or RM386 psf in May 2015 to develop the RM2 billion-Sunway Serene.

Western Digital’s plan to dispose of its factory site comes after the company’s announcement of shutting down the plant by the end of 2019 due to “declining long-term demand for client HDDs”.

“Western Digital has taken steps to rationalise its HDD manufacturing operations globally. The company will decommission its HDD manufacturing facility in Petaling Jaya, Selangor, by the end of calendar year 2019. This transition will be executed in close collaboration with employees, customers, supply partners and other critical stakeholders.

“The data technology industry is undergoing substantial change. This market transformation is driving increased adoption of SSDs and NAND flash in traditional HDD applications. The change has contributed to growth in SSD/NAND flash and declining long-term demand for client HDDs. Consequently, Western Digital plans to expand SSD manufacturing in Penang. The company is in the final stages of commissioning its second SSD facility in Penang, which will go into production in the coming months,” a Western Digital spokesperson told The Register on July 16.

Meanwhile, Western Digital (Malaysia) Sdn Bhd Managing Director Gouw Kim San said in a statement: “Western Digital Corporation is continually evaluating and transforming its business to deliver value to customers and remain competitive as a data technology leader. This transformation requires that the company take difficult but important actions, including optimisation of its large-scale manufacturing facilities located throughout Asia.”

Gouw has been contacted for his response.