JU/NY + Evie Fernandez
Head over to No Black Tie to catch 22-year-old Evelyn Feroza Fernandez, more popularly known as Evie, performing the blues, jazz and classic rock songs. Inspired by old legends such as Ray Charles, Etta James, Ella Fitzgerald and Shirley Bassey, Evie has been making waves around local pubs. She will be backed by jazz/hip hop/R&B/dance/EDM band JU/NY, whose portfolio includes sharing the stage with famed artists such as Snoop Dogg, Erykah Badu and Lupe Fiasco. Showtime is 10pm tomorrow and Sunday. Cover charge is RM50. No Black Tie is located at 17 Jalan Mesui, Off Jalan Nagasari, Kuala Lumpur. For reservations, call (03) 2142 3737 or email [email protected].

Janine Jansen plays Mendelssohn
Bask in the music of Mendelssohn, Tchaikovsky and Sibelius this weekend with the Malaysian Philharmonic Orchestra, with Dutch violinist Janine Jansen and Swedish conductor Daniel Blendulf. Jansen has played for the BBC, the Berlin Philharmonic Orchestra, Walt Disney Concert Hall and the Los Angeles Philharmonic Orchestra to sold-out performances. They will be performing The Tempest, Violin Concerto, and the Second Symphony. Tickets are priced at RM95, RM127, RM169 and RM212 and can be purchased at www.mpo.com.my, or by calling (03) 2331 7007 or at the MPO Box Office on the ground floor, Tower 2, Petronas Twin Towers, Kuala Lumpur.

Patrick Terbrack Quartet
At 10pm today and tomorrow, be serenaded by the Patrick Terbrack Quartet at Alexis Bistro. American axophonist Patrick Terbrack has travelled the world to give a taste of his musical style to audiences. From Peru, Colombia and New York to Malaysia, Singapore and South Korea, Patrick plays hard-bop and soul reminiscent of John Coltrane, Cannonball Adderley and Wayne Shorter. A dress code of no shorts and slippers applies. For inquiries, call (03) 4260 2288 or visit www.alexis.com.my. Alexis is located at Great Eastern Mall, 303 Jalan Ampang, Kuala Lumpur.

5K Color Me Run
The ever popular 5k Color Me Run is taking place on Sunday at 7.30am with its starting point at Taman Tasik Titiwangsa. This charity run’s proceeds will benefit the Communities Unite for Purewater (CUP) project and the East Coast flood victims. Although registration to participate in the run has ended, it’s still a great to head to the park to support the runners and partake in the fun. For inquiries, email [email protected]

3R International Marathon and Carnival
The 3R International Marathon and Carnival is back to raise awareness on living the eco-friendly way. Learn about recycling, reducing and reusing waste at the marathon site this Sunday. There will also be performances and entertainment by artists as well as competitions and NGO awareness programmes. Venue of the carnival is around the Palace of Justice, Putrajaya. For more info, log onto www.3rinternationalmarathon.com. 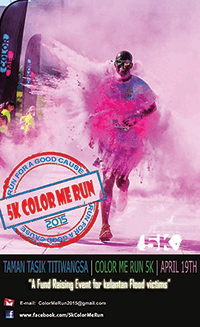 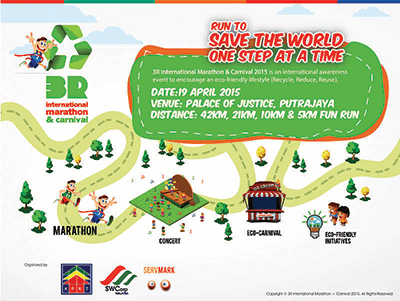 1 GREAT CONCERT NOT TO MISS 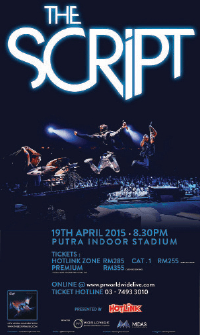 Irish band The Script is coming our way! Catch them on Sunday night at the Putra Indoor Stadium. After their rise to stardom in 2008 with the release of their album featuring hit songs The Man Who Can’t Be Moved and Breakeven (Falling to Pieces), their music has been heard on popular TV programmes such as The Vampire Diaries, 90210 and Ghost Whisperer. Their newest album entitled No Sound Without Silence was released last September, a collection of songs that the trio wrote while on the road throughout the years. Showtime is at 8.30pm. Tickets for the concert are RM255, RM285 and RM355. For inquiries or to purchase tickets, visit www.prworldwidelive.com or call (03) 7493 3010.

Tomorrow, the Shangri-La Hotel Kuala Lumpur will launch its very first Farmers’ Market, which is to be held every Saturday from 9am to 1pm. Open to the public, this exciting new event offers guests and patrons the opportunity to enjoy some of the freshest organic fruit and vegetables, fish and seafood at the best market prices. Among the produce that visitors can look forward to are alfalfa, mung bean sprouts, fennel, Japanese cucumber, broccoli, mushrooms, fresh herbs, free range eggs, cottage produce, barramundi, red snapper, garoupa and prawns. The Shangri-La Farmers’ Market will take place at the Lemon Garden Café Terrace, Shangri-La Hotel, 11 Jalan Sultan Ismail, Kuala Lumpur. For inquiries, call (03) 2032 2388. 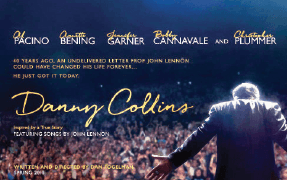 Danny Collins
It is a rare treat to see Al Pacino in a comedy, and Danny Collins gives us that opportunity Pacino plays 1970s rocker Danny Collins who can’t give up his hard-living ways. Then comes a letter written to him by John Lennon, unopened for 40 years and handed to him by his manager (Christopher Plummer). Its contents pushes Danny to embark on a heartfelt journey to rediscover his family, find true love, and another calling in life. Also stars Jennifer Garner, Bobby Cannavale and Annette Bening.

Good Kill
Starring Ethan Hawke, Zoe Kravitz and January Jones, Good Kill revolves around a a drone pilot from Las Vegas who attacks the Middle Eastern terrorists from behind the controls, thousands of miles away from the enemy lines. Weighed down by his conscience and questioning the ethics of his work, Major Thomas Egan (Ethan Hawke) begins to suffer from post-traumatic stress disorder, thus revealing the psychological toll that drone pilots endure. Although far away from combat and in no way endangering his own life, Egan still struggles to come to terms with the knowledge that his work is killing hundreds of innocent civilians along the way.

Child 44
Based on the best-selling novel of the same name by British writer Tom Rob Smith, the movie stars Tom Hardy as Leo Demidov, a high-ranking military officer in 1950s Stalinist Russia. After falling from grace and banished to live in a godforsaken outpost in the middle of nowhere, Demidov and his wife stumble across the work of a serial killer bent on murdering young children in the dozens. Teaming up with General Nesterov (Gary Oldman), the trio go on a hunt to capture the murderer. (See review on http://www.theedgemarkets.com/my/article/murder-stalin%E2%80%99s-paradise) 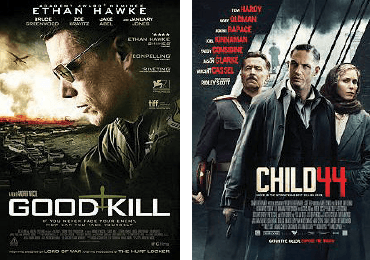