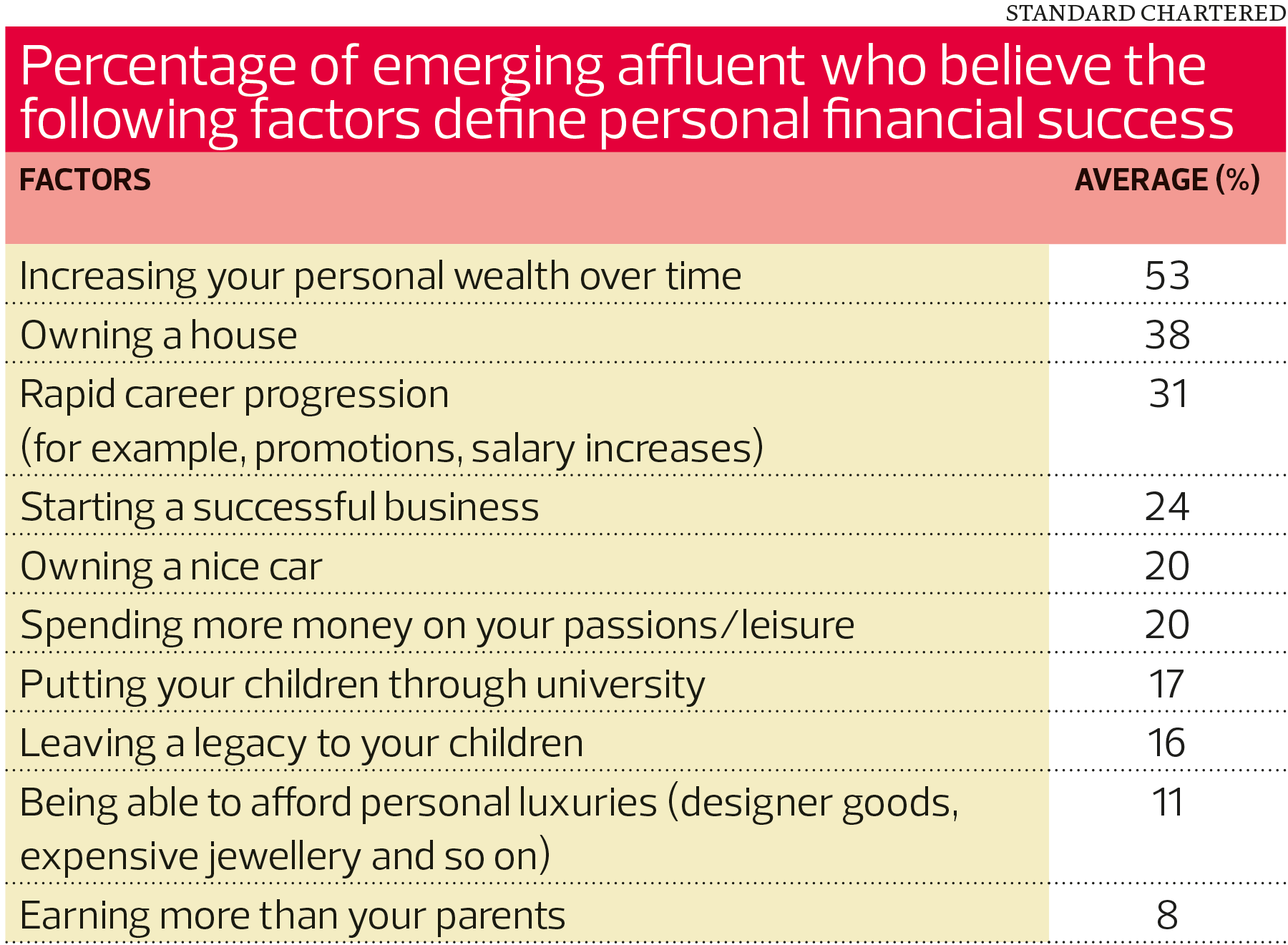 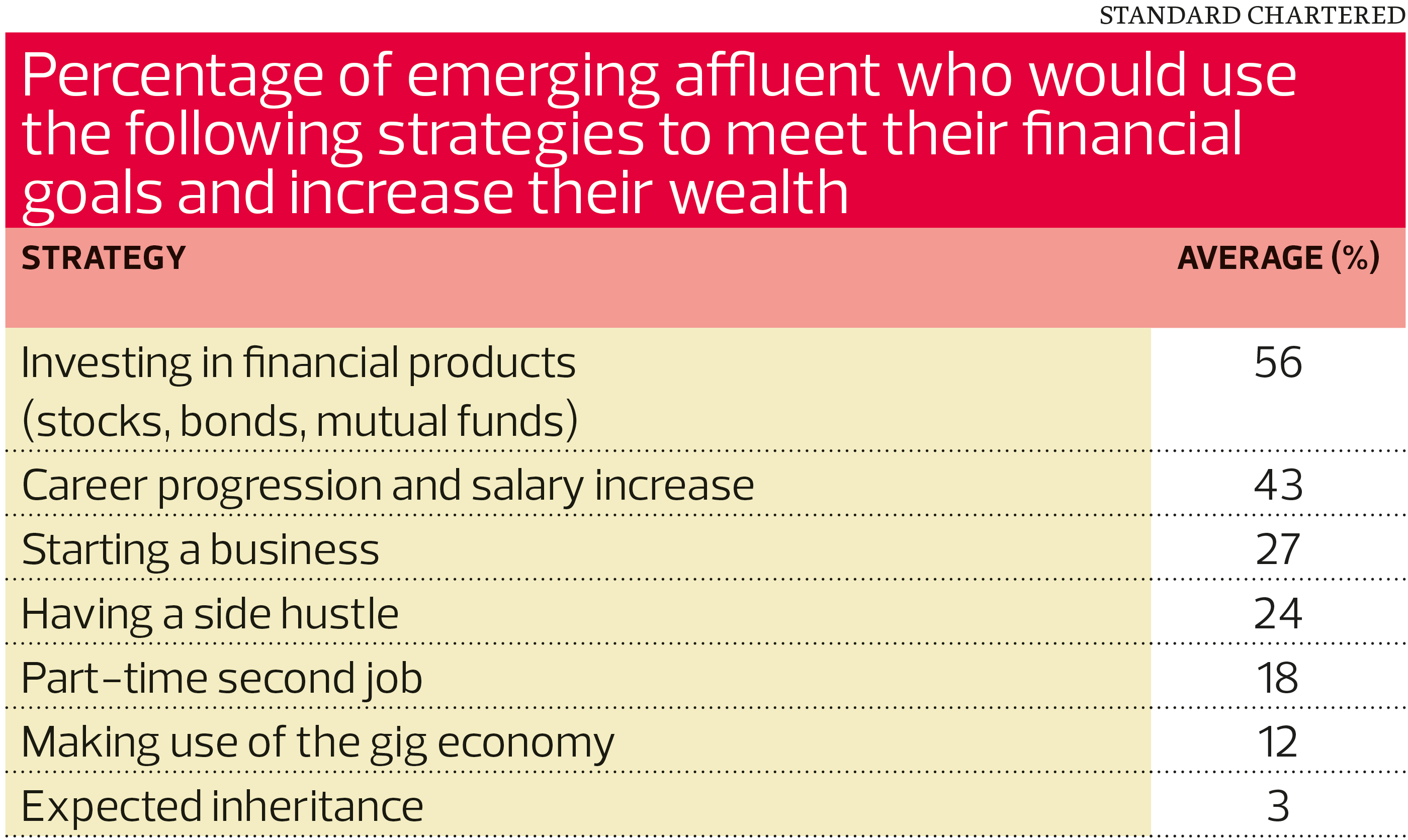 The emerging affluent in Malaysia believe that managing their finances is key to achieving social mobility. However, many say their lack of financial knowledge is hindering them from succeeding further, according to Standard Chartered’s latest study.

The study found that 71% of the 1,000 Malaysian respondents believe that effective financial management leads to greater social mobility, but 43% feel that their inadequate financial knowledge is holding them back from their aspirations.

Malaysia has a 55% social mobility rate, according to Standard Chartered’s “Climbing the Prosperity Ladder: The Rise of the Socially Mobile in Asia, Africa and the Middle East” report. “This is strong, considering that continual social movement is more challenging in mature markets and that the Malaysian economy is more developed than many of its emerging market neighbours.”

Some 11,000 emerging affluent consumers in China, Hong Kong, India, Indonesia, Kenya, Malaysia, Nigeria, Pakistan, Singapore, South Korea and the UAE participated in the study. The report, which was released on Oct 29, describes the emerging affluent as those who have money to spend, save and invest.

Of the Malaysian respondents, 66% believe that financial education will help them achieve their financial goals faster. The report says this group is hungry to improve their financial position but the lack of professional guidance, which gives them a broad view of the available options and offers solutions that are tailored to individual needs, is a missed opportunity in all markets.

“Instead, the emerging affluent turn to friends and family, with more than a third citing this as their main source of financial advice (35%). Professional financial guidance could be the missing link in achieving an integrated investment strategy,” it adds.

“The financial knowledge and advice gap limits the returns that the emerging affluent can earn from their capital, hindering them from hitting their wealth targets. In total, 52% say they are far away from meeting their top financial goal, with half of them (25%) describing themselves as ‘very far away’.”

“Additionally, almost eight in 10 use only one investment product or none at all, as they may not understand all the solutions available to them, or have access to relevant market insights. This suggests that personalised investment advice could help the emerging affluent reach their goals more effectively, by taking advantage of a wider range of solutions to build a diversified portfolio, aligned to the amount of risk they can take,” he adds.

“Savings accounts are the most popular method of achieving their wealth targets, with nearly half (49%) using them to achieve their top financial goal across all markets. This is followed by time deposits (29%) and property investments, with less than a quarter (23%) using real estate to increase their wealth,” says the report.

“Considering that just over half believe they have an investment target and strategy, this reliance on basic savings accounts could suggest that the emerging affluent believe they are using more advanced strategies than in reality.”

Relying too heavily on basic savings accounts may not be the best way to increase their savings as it can overlook opportunities for higher returns, says the report. Instead, developing an investment strategy through the use of a diverse investment portfolio could help many of the emerging affluent to achieve their financial goals faster.

Fintech seen as a secret weapon for success
The report says personal financial success is defined differently in the various markets as it depends on where the respondents live. More than half (53%) of the emerging affluent think that increasing personal wealth over time is the most important sign of achievement.

The report adds that capital growth can be attributed to increased earnings and good financial planning, but accumulating wealth is the top priority for most of the respondents. For 24% of them, personal financial success is defined as starting a successful business. Among Malaysian respondents, the figure stands at 29%.

“Budding entrepreneurs are common among the emerging affluent. More than a quarter (27%) see starting their own business as a key strategy for increasing their wealth. This figure rises significantly in Nigeria (41%), Indonesia (39%) and Malaysia (35%), where entrepreneurial spirit is strongest,” says the report.

“The emerging affluent are keen to use other enterprising strategies to make money, with 24% saying they would have a side hustle [a passion project or interest pursued alongside a full-time job, with the intention of turning it into their primary source of income] alongside their day job, while 18% say the same of a part-time job and 12% would use the gig economy as a strategy for increasing their wealth.”

The report says financial technology (fintech) is a “secret weapon” for the emerging affluent, with 65% of them acknowledging that their familiarity with digital tools has been key to their personal success. Also, 61% believe that digital money management has helped them get closer to their financial goals.

“Digital technology makes financial products more visible and accessible, allowing users to make more informed decisions quickly and easily. The emerging affluent confirm this is the case, with the majority (65%) saying that online banking makes them feel they have more control over their money and investments,” says the report.

The emerging affluent are very savvy when it comes to using technology for their everyday banking, but they have not fully adopted it for more strategic financial activities such as investing, says Aalishaan Zaidi, global head of digital banking at Standard Chartered. This could be stopping them from maximising their wealth. So, he suggests bringing the accessibility of digital tools to wealth management to help the emerging affluent achieve their goals and grow their nest egg.

“We know that investments can involve bigger and more complicated decisions than everyday banking, which is why providing clients with more choice and flexibility on how they bank with us is crucial. This is not about removing face-to-face banking because we know that some people prefer to make financial decisions using traditional channels while others want the convenience of tracking their wealth on-the-go using their mobile phones,” says Aalishaan.

The report points out that even if there is risk involved, the emerging affluent would have the appetite for managing their wealth more broadly online if there are strong rewards. “When investing in online financial products, 53% would accept a high level of risk in exchange for a high level of return. Malaysia’s emerging affluent are particularly confident when it comes to high stakes, with 59% accepting the risk/return trade-off, although India still leads the way with two-thirds of the respondents willing to do so,” it adds.

The emerging affluent are comfortable going online for financial advice, with more than half of all respondents (56%) saying they would invest in financial products online if an on-demand adviser was available.

Prasenjit Chakravarti, global head of personal banking at Standard Chartered, says different service providers offer varying levels of advice and support. Hence, the emerging affluent should consider whether the platforms provide a professional on-demand financial adviser to help them make the best decisions for their financial situation and goals.

Technology is a force for social mobility, allowing those who master it to improve their position in society, according to the report. It notes that digital savviness goes hand-in-hand with success as 62% who demonstrate it are socially mobile, compared with half of them who are not.

“Three-quarters of confident, frequent users of tech products consider themselves better off than their parents, compared with just 61% of those who are not. Tech confidence is important to those who want to be financially digitally savvy as this enables them to make the most of new banking technologies when managing and growing their wealth,” says the report.

On the other hand, not being up to speed with technology can prevent the emerging affluent from achieving their wealth goals, it notes. “Unsurprisingly, those who are not digitally savvy have a less positive experience of digital banking. Less than half (43%) of this group say digital banking makes them feel like they have more control over their investments, compared with three-quarters of their more knowledgeable peers.

“As embracing technology is helping people be more financially savvy than ever, going digital has never been so important for helping the emerging affluent move onwards and upwards.”