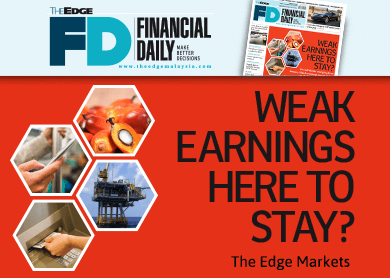 KUALA LUMPUR: Even though not all publicly-traded companies have posted their March-quarter (1Q) earnings yet, the common theme among those that have issued earnings to date was: challenging. And the portrait of corporate health being painted going forward looks pretty bleak.

Major telecommunication players such as Maxis Bhd, DiGi.Com Bhd and Axiata Group Bhd got off to a slow start in 1Q15, posting a decline in net profit despite improvements at the revenue level.

But these telecommunication companies were not alone in reporting falling profits.

Last week alone, higher bad loan provisions took a toll on CIMB Group Holdings Bhd’s and Affin Holdings Bhd’s first-quarter net profit, plunging by 45.6% and 78.9% respectively from the year-ago period. Both banking groups have warned the outlook for the rest of the year will “remain challenging”.

The tabling of the 11th Malaysia Plan (11MP) last Thursday also failed to excite the local market. AllianceDBS Research noted that the benchmark FBM KLCI had last Friday broken below the 1,795 support to reach the lowest low of 1,780.11 points since March 18, 2015 as market participants continued to play on the selling side in anticipation of a lower market. The index closed down 0.42% at 1,787.50 last Friday.

The ringgit has fallen 6.1% against the US dollar in the past six months, the second-biggest drop after Indonesia’s rupiah. While it has helped to boost overseas earnings for exporters, the weak ringgit exchange rate has caused importers to pay more for their purchases, leading to lower profit margins.

But not all is gloom and doom, said Areca Capital Sdn Bhd chief executive officer Danny Wong who believes that there are some “hidden gems” in the information and communications technology (ICT) sector.

“ICT stocks, particularly semiconductor stocks, may benefit from the booming technology sector. These companies have also shown a strong performance in 1Q15,” he told The Edge Financial Daily.

Semiconductor packaging company Inari Amertron Bhd, for one, reported a 52.5% jump in net profit in 1Q15.

However, Wong is underweight in the banking and consumer-driven sectors such as pharmaceuticals.

“The effects of the goods and services tax (GST) will be felt in the pharmaceutical sector, as consumers would not hold back their spending on day-to-day consumables for long, but may have stocked up on medicines during the pre-GST period,” he said.

Meanwhile, Inter-Pacific Securities Sdn Bhd head of research Pong Teng Siew opined that the ICT sector was a beneficiary of the tailwind from a weaker ringgit.

“Yes, the ICT sector did do very well in the first quarter of the year and had benefited from foreign exchange gains due to the weaker ringgit. However, indications do not point to a further weakening of the ringgit in the second half of the year,” said Pong.

In a note last Friday, Kenanga Research opined that the construction sector should benefit from the 11MP, in particular the contractors for the mass rapid transit and light rail transit projects.

“We are positive on the 11MP announcement given the government’s commitment to implementing the announced projects within the next five years, and we affirm our view that these projects will benefit the whole construction sector.

“As such, we reiterate our overweight call on the sector with IJM Corp Bhd, MMC Corp Bhd and Mitrajaya Holdings Bhd as our top picks,” said Kenanga Research.

Etiqa Insurance and Takaful head of research Chris Eng also prefers the construction sector due to the positive contract wins news flow in the sector.

“The utilities sector should also pick up, once the issues surrounding 1Malaysia Development Bhd (1MDB) are cleared up,” said Eng.

Utility giant Tenaga Nasional Bhd (TNB) was last Friday’s biggest loser on Bursa Malaysia, dropping 30 sen or 2.14% to close at RM13.70, in what may seem as investors’ reaction to reports that TNB may take over 1MDB’s power-generation assets for a reported RM16 billion.

RHB Research head of research Alexander Chia cautioned that investors will face many headwinds in the second half of the year, on both international and local fronts.

“There is the issue of a potential rate hike by the US Federal Reserve in the second half, while on the local front there is buzz surrounding Fitch’s (Fitch Ratings Inc) potential downgrade on Malaysia’s credit rating outlook and 1MDB issues.

“These are all aspects that need to be taken into consideration when looking into the performance of the economic sectors in the coming months,” said Chia.

Corporations have also taken note of the tough challenges in store over the next few months.

Sime Darby, for instance, has come out to say that it was unlikely to meet its headline key performance indicator target of RM2.5 billion net profit for the financial year ending June 30, 2015 and has revised down its projection.

In a report last Friday, M&A Securities Sdn Bhd warned that the external environment can be “quite rough and unforgiving for an open economy like Malaysia even though it can plan and hope to hammer gross domestic product growth of 5% to 6% until 2020”.

“Should external conditions turn down south, Malaysia’s economy can be dragged down but thankfully, the export growth target until 2020 under the 11MP is quite low or rather achievable.

“Given that, we think there should be upside risk to the export target of 2.1% especially when advanced economies are expected to settle their domestic problems soon,” said the brokerage firm.

“All in, Malaysia can be calmed and sail through quite easily to reach the coveted ‘high-income nation’ target by 2020. The fact that the government has put fiscal debt target to less than 45% is also heartening as we think the fiscal space available can be used to combat global recession, if any.

“But for now, we see no reason to change our 2015 GDP (gross domestic product) projection of 5%,” it added. 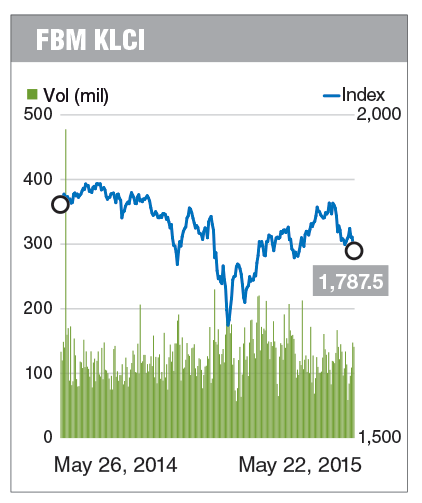